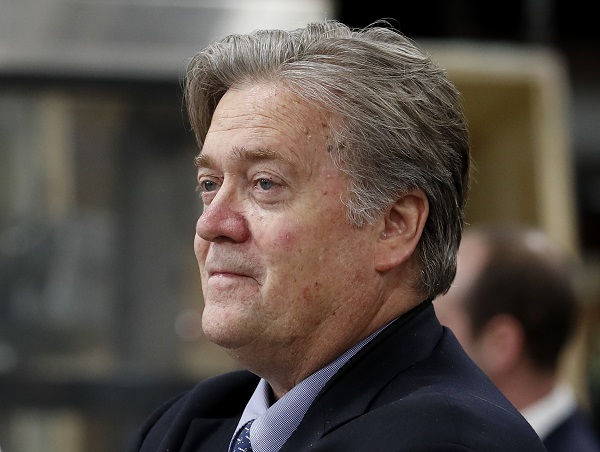 U.S. President Donald Trump climbed down from his fire and brimstone rhetoric of last week and praised North Korean leader Kim Jong-un for stepping back from his threat to launch missiles toward Guam.

Trump tweeted Wednesday: “Kim Jong Un of North Korea made a very wise and well reasoned decision. The alternative would have been both catastrophic and unacceptable!”

The president’s remarks — made in response to North Korean state media reports Tuesday that its leader Kim would hold back on plans to strike the Guam vicinity with ballistic missiles — was a major shift in tone from his threat of “fire and fury” on Aug. 8.

White House chief strategist Steve Bannon advised against a military solution to solve the North Korean nuclear issue and warned that the focus should be on an economic war with China.

“There’s no military solution [to North Korea’s nuclear threats], forget it,” Bannon told the American Prospect magazine in an interview published online Wednesday. “Until somebody solves the part of the equation that shows me that ten million people in Seoul don’t die in the first 30 minutes from conventional weapons, I don’t know what you’re talking about, there’s no military solution here, they got us.”

His remarks were in apparent contradiction of President Trump’s claim that all options, including a military one, are “on the table”

Bannon also indicated that a deal with Beijing might be considered, in which China got North Korea to freeze its nuclear buildup with verifiable inspections, while the United States removed its troops from the Korean Peninsula. But Bannon added such a deal seemed remote.

“We’re at economic war with China,” Bannon said. “One of us is going to be a hegemon in 25 or 30 years,” he said, adding it will likely be China “if we go down this path.”
He continued, “On Korea, they’re just tapping us along. It’s just a sideshow.”

U.S. Secretary of Defense Jim Mattis said Monday that “it’s game on” if North Korea shoots a missile at U.S. territory, including Guam, and that such an act would escalate into war. But he and Secretary of State Tillerson in a joint op-ed in the Wall Street Journal on Monday also called for “peaceful pressure campaign” on the North.

Pence said in a joint press conference with Chile’s President Michelle Bachelet, “The U.S. places great importance on the ongoing diplomatic isolation of the Kim regime and we strongly urge Chile today, and we urge Brazil, Mexico, and Peru to break all diplomatic and commercial ties to North Korea.”

U.S. State Department spokeswoman Heather Nauert told reporters at the Foreign Press Club in Washington Wednesday, “I don’t think there is anyone in the U.S. government or any one in the world who would like to see the DPRK [Democratic People’s Republic of Korea] go forward with its threats to do anything to U.S. territories or any other nation or ally of ours.”

She laid out three conditions for Washington to hold dialogue with Pyongyang: a cessation of North Korea’s ballistic missile and nuclear testing and a halt of its destabilizing activities in the Northeast Asia region.

“The United States is willing to sit down with North Korea and have a conversation,” said Nauert. “But we are not anywhere near that point yet. And that is because North Korea has not stopped its destabilizing activities.”

Nauert also dismissed remarks by former Director of National Intelligence James Clapper that a denuclearized North Korea is no longer “in the cards” and that Washington has to learn to cap and control its nuclear program.

The spokeswoman went onto emphasize that the Trump administration has been clear that it will “not accept a nuclearized North Korea.”

She continued, “There is no one who knows those threats better than the neighbors of North Korea. The United States shares the concerns that our Japanese and that our South Korean allies all face: the security threat of North Korea.”

The State Department has likewise rejected a suspension of U.S. and South Korean joint military exercises in exchange for a moratorium on the North’ nuclear and missile tests.

North Korea has often ramped up bellicose rhetoric and provocations during periods of joint military exercises between South Korea and the United States.

Mattis explained all potential actions against the North, according to the Defense Ministry here, and also pledged that Washington would protect South Korea from any attack by North Korea.

Mattis and Tillerson were scheduled to hold a security meeting with the Japanese foreign and defense ministers in Washington on Thursday and coordinate their response to the “evolving regional security environment,” according to the State Department.
BY SARAH KIM [kim.sarah@joongang.co.kr]