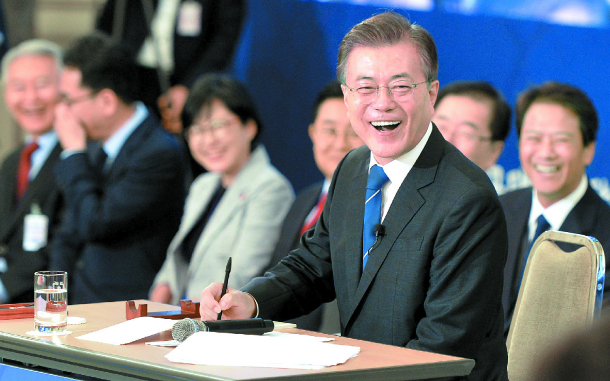 President Moon Jae-in, left, holds a press conference to mark his 100th day in office on Thursday in the Blue House. [YONHAP]

We are living in a dynamic country where keeping up with the news is never easy. Some even joke that we are riding a roller coaster named Seoul. But if you live in another country for three or four years and then return, you see that things have actually not changed at all. All the same old problems remain unresolved. The North Korea crisis is a classic example, as it returns almost once a year, albeit in a slightly different version every time. Each new day is frightening, yet we are still in the same place we’ve been in for over 20 years.

Just after a few days of frustration and agitation, Seoul became surprisingly calm. Some even say that the August crisis theory is nothing more than fake news created to support the U.S. military-industrial complex. It would be great if that were the case, but it’s not. Sadly, according to experts, the real crisis is about to begin. The North is nearing the operational deployment of its intercontinental ballistic missiles (ICBMs), they said, tipped with nuclear warheads. If that leads to a chain of nuclear proliferation by its neighbors, including Japan, then the United States won’t be able to handle the situation. Whether it will be a preventive strike or a peace treaty and withdrawal of U.S. forces from the South, the endgame will be decided for it.

The North is expected to master the technology around the end of this year. The government and military, therefore, must be feeling extremely tense. But the reality is different. The Blue House said it does not agree that a crisis is coming to the peninsula. The prime minister and foreign minister, as well as other members of the cabinet, are going on summer vacation one after another. The National Assembly will open its session, but the ruling Democratic Party’s priority is scrapping budgets that allocated the “accumulated evils” of the Park Geun-hye administration. It’s been four months since the U.S. Congress approved a resolution against the North’s ICBM technology, but the South maintains the attitude that nothing has happened.

The Moon Jae-in administration was created in the aftermath of the Sewol ferry’s sinking. He is putting all efforts toward making the country safer, and security is the top priority. But there is no sense of crisis, perhaps because he has the naïve thinking that the North will not use nuclear weapons against Korean people. Moon said the Roh Moo-hyun administration’s security strategy was successful, citing how there was no military conflict at the time. He, however, ignored the fact that the North’s nuclear tests began during the Roh presidency. After Moon said no military action can be decided without the South’s consent, U.S. media reported that Moon issued a warning to Trump.

There is nothing surprising in the fact that Moon vowed to stop a war at all costs. The problem is how he can do it when facing the reckless Kim Jong-un. Peace does not come with armed forces, but there is no peace when there are no armed forces. Moon’s Liberation Day speech should have stressed his determination that he will defend the country at all costs. There should have been a clear warning to Kim, who destroys any chance for peace with his nuclear and missile programs. Because there was no determination, the media began reporting that Moon’s stand against a war was aimed mostly at the United States.

When speculations were high 23 years ago that the United States would conduct a preemptive strike on the North, then President Kim Young-sam said war is unacceptable. But the United States had no doubt that Kim was worrying about the damages the South would receive from the North.

Moon said he will closely cooperate with the United States to overcome the security crisis. This is comforting, but it would have been nicer if his answers at the press conference on Thursday further cleared up any doubt. He should have addressed where we are standing right now and what will happen after the North crosses the red line at the end of this year. But he just repeated that war is unacceptable. It is alarming. The North will not take military action after seeking our consent. The North should be punished, but Moon is wrongly targeting the United States.