Ballyhooed returned seal is in reality a copy

Ballyhooed returned seal is in reality a copy 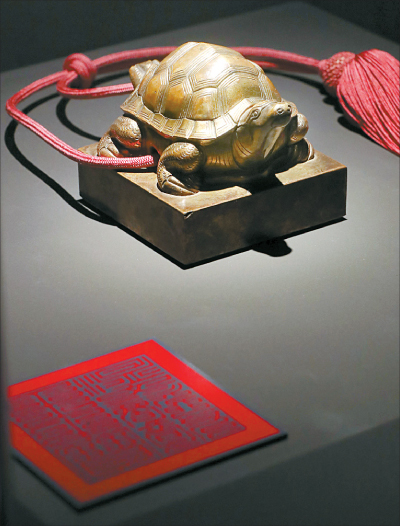 Two years ago, when Korea was authorized to bring back the royal seal of King Deokjong (1438-57) from the Seattle Art Museum in the United States, the Cultural Heritage Administration (CHA) trumpeted the triumph of a seal created in 1471 finally coming home after being lost in the 1950-53 Korean War.

It turns out, that’s not what came home. The seal was a reproduction from 1924, when Korea was under Japanese rule (1910-45). It was kept at the Seattle Art Museum since 1963, a year after an American art collector purchased it in New York and donated it to the museum.

Such opaqueness has put CHA under fire, damaging the credibility of the state-run organization that is at the top of managing articles of cultural heritage of Korea.

The royal seal of Deokjong was created on the order of Deokjong’s son, King Seonjong (1457-94) in 1471 to honor his father posthumously. It was kept in the Jongmyo Shrine in central Seoul. It went missing in 1924, along with four other seals, when a theft occurred in the shrine.

“Last year, we conducted a non-destructive test to find out if the seal is original or not as we became aware only then of a newspaper article published in 1924 stating it was stolen,” said Kim Yeon-su, director of the museum.

“We informed CHA in February that the seal we have is the reproduction and made corrections on our Website.”
According to Kim In-kyu, an official in the museum’s artifact research department, seals created in the 15th century did not use zinc. “But the seal returned from Seattle is 10 percent zinc. So we concluded that the seal is a reproduced version and not the original.”

However, he sidestepped talk of the seal being “fake” or an “imitation.” Kim said that “although the seal has been reproduced during the Japanese colonial era, it was remade at the order of King Sunjong (1847-1926) and has been officially recognized as a royal seal and kept in the Jongmyo Shrine.”

“The Cultural Heritage Administration should make a public apology,” said Buddhist monk Hye Moon, head of a private cultural organization known as the Cultural Asset Redemption Organization (CARO). “Being unaware of the fact that the seal is not original has damaged the reputation of the state organization. Moreover, the fact that they only disclosed it today means that they attempted to deceive the public.”

The seal of Deokjong is currently on display at “The Return of the Royal Seals” exhibition that begins today and runs until Oct. 29 at the National Palace Museum inside Gyeongbok Palace in central Seoul.

Visitors can see 12 royal seals that have been returned to Korea since 2014 including the royal seal of Queen Munjeong and King Hyeongjong, which came back to Korea last month from the United States on President Moon Jae-in’s presidential plane.