Choi Hye-jin gets second KLPGA win as an amateur

Choi Hye-jin gets second KLPGA win as an amateur 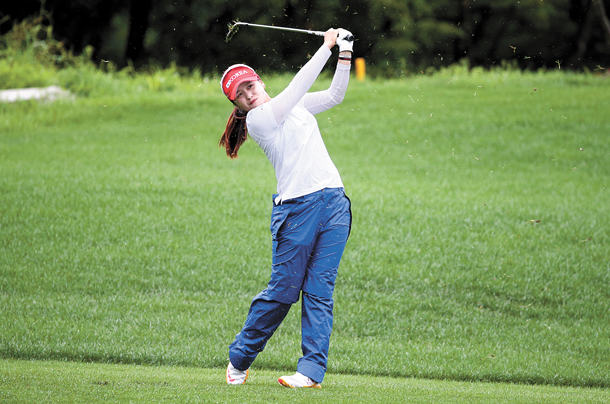 Choi Hye-jin watches her shot during the final round of Bogner MBN Ladies Open at The Star Hue Country Club. [YONHAP]

Despite three hours of delay due to rain, Choi came back onto the course with a bogey-free round of six under par, 65, and made four birdies in the front nine. Kim So-yi made three consecutive birdies from the ninth to the 12th to tie the lead, but with Choi’s eagle on the par-four 11th, which she made with a 7.5 meter (25 foot) putt after hitting the green in one, Choi once again took sole lead.

On the back nine, Kim made two birdies to tie the lead with Choi, but with a triple bogey on the par-four 17th, Choi was declared champion, making her the first amateur player since 1999 and third player in the KLPGA Tour history to be a multi-winner. Though Choi hasn’t made her debut as a professional, she has already made her name known on both the KLPGA Tour and the LPGA Tour.

Choi won the ChoJung Sparkling Water Yongpyong Resort Open, becoming the first amateur since Kim Hyo-joo to win a KLPGA tournament. Then, at the U.S. Women’s Open in July, a major tournament on the LPGA Tour, she finished runner-up, after Park Sung-hyun. After a week off, Choi will make her KLPGA Tour debut as a professional at the Hanwha Finance Classic 2017, which starts on Aug. 31. Before competing in her first tournament as a professional, Choi will sign her sponsorship deal with Lotte on Aug. 28.

Park Ji-young and Kim So-yi, the co-leaders after the second round, finished runner-up and third, respectively. Since Choi played the weekend as an amateur, Park got the winning purse of 100 million won ($87,800).

Next, the HighOne Resort Ladies Open 2017 will be played at High1 Country Club in Jeongseon, Gangwon, starting on Thursday.