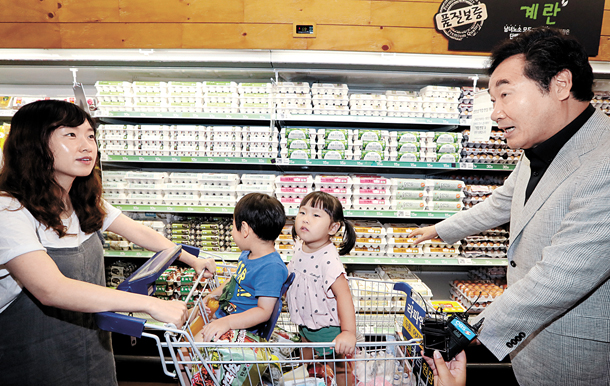 Prime Minister Lee Nak-yeon, right, talks with a shopper about the recent pesticide contaminiation crisis at a retail store in Sejong on Saturday. [YONHAP]

On Saturday at Hanaro Mart in Mapo District, western Seoul, a banner proclaiming that the eggs on sale have passed the government’s pesticide tests stood in the middle of the store.

The government on Friday announced that eggs from 1,190 farms, more than 95 percent of egg-producing farms, have been approved for market distribution.

Yet there were hardly any shoppers willing to put eggs in their shopping carts.

“It seems consumers’ mistrust has increased as egg-related problems returned after avian flu broke out at the end of last year,” said a store employee.

“As eggs that received the government’s safety approval were found to be contaminated with pesticides, it’s hard to trust food products,” Kim said.

The recent pesticide contamination crisis has revealed the government’s sloppy mistakes in the lead-up to the scandal.

One of the key issues has been the government’s “hazard analysis and critical control points” (Haccp) certification, which supposedly guarantees that a product has been produced in an environment free from biological, chemical and physical hazards that could make it unsafe. The certification is issued by the Korea Agency of Haccp Accreditation and Services (Kahas), which sits under the Ministry of Food and Drug Safety.

As of Friday, 29 of the 49 farms that have been banned from distributing eggs had received the government certification.

Eggs from a farm in South Jeolla that carried the Haccp certificate turned out to contain 21 times the acceptable amount of the pesticide bifenthrin.

“Because access to farms was banned between November last year and May this year due to avian flu, we weren’t able to conduct inspections and management on pesticides,” said an official at the Food and Drug Safety Ministry.

The Food Safety Ministry only approved bifenthrin contamination at 0.01 milligrams per kilogram (0.01 ppm) in March 2004. However, it turned out that until last year the government did not test farms for the use of pesticides.

“The orders from the Ministry of Agriculture, Food and Rural Affairs to test on whether there are any chemicals remaining on eggs earlier this year was the first,” said a local government official.

It was on Saturday that the Agriculture Minister and the Food Safety Minister held a joint meeting with the heads of local governments where they decided to hold additional investigations of the 420 egg farms.

This is not the first time a product that has received the government safety’s approval has been found to be contaminated with a toxin.

During the humidifier sterilizer tragedy in 2011, an investigation discovered that sterilizers that had received a government safety certificate did contain harmful chemical materials.

The lack of communication and information exchanges between different government departments that reportedly make the situation more complicated and confusing have been blamed every time a health-related crisis emerges.

Due to the crisis, these two different government departments should be working closely together, yet each ministry has made separate announcements regarding the crisis, which only made the public more confused.

Ryu Young-jin, the Food Safety Minister, held a press conference on Aug. 10 when the egg pesticide situation in Europe was reported and claimed that no bifenthrin was found in eggs and chickens produced in Korea.

“[Consumers] should not be worried as there are no problems with local [eggs and chicken],” said Ryu during the press conference.

But at the same time the Agriculture Ministry was already independently conducting investigations on 980 farms.

Just four days after the press conference the Agriculture Ministry announced that it had found the pesticide fipronil on an egg farm in Namyangju, Gyeonggi.

The fact that the Agriculture Ministry independently investigated the eggs while the Food Safety Minister was making a press conference was revealed two days later at the National Assembly.

The failure of the two ministries to coordinate their work continued until recently.

The Agriculture Ministry on Thursday announced that 29 farms were unfit to distribute eggs for sales. An hour later it corrected the number to 31.

This mistake happened because the Agriculture Ministry announced the farms while failing to include the two farms that the Food Safety Ministry had found.

“When the Middle East Respiratory Syndrome first broke out the government was disorganized, but when the Korea Center for Disease Control and Prevention (KCDC) became the central department and the situation was managed by the Office of the Prime Minister, the situation started to stabilize,” said Park Tae-gyun, a bioengineering professor at Korea University.

President Moon Jae-in asked Prime Minister Lee Nak-yeon on Wednesday to handle the situation overall as the Agriculture Ministry and the Food Safety Ministry are confusing the public with their separate statements.