For Coach Shin, a win against Iran is enough

For Coach Shin, a win against Iran is enough

In preparation for Korea’s final two qualifying matches for the 2018 World Cup, the head coach of the national men’s football team, Shin Tae-yong, called up 16 players from the local K league and Chinese Super League to practice at the National Football Center in Paju, Gyeonggi, on Monday. 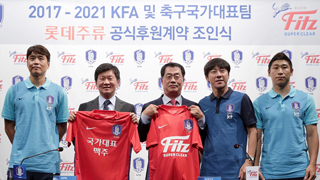 From left, Lee Dong-gook, a player on the Korean men’s football team; Chung Mong-gyu, president of the Korea Football Association; Lee Jong-hoon, senior managing director at Lotte Chilsung Beverage; Shin Tae-yong, head coach of the Korean team; and Lee Keun-ho, another player on the team, during a press conference announcing Lotte’s sponsorship of the team in Paju, Gyeonggi, Monday. [YONHAP]

The team is hoping to advance to the World Cup for a ninth consecutive time, but their chances are hanging by a thread. Korea is ranked second in Group A but is only one point ahead of third-place Uzbekistan. Only the first two teams in a group get a guaranteed berth in the World Cup, so Korea’s two remaining matches will be a crucial determinant of whether they make it to the tournament.

That’s why Shin is having players concentrate on getting a win rather than the biggest win. If Korea beats Iran in its match on Aug. 31, the team gets three points added to their World Cup standing, widening their lead against Uzbekistan.

“If we’re meeting Iran in a friendly, I will make the team play attacking football,” Shin was quoted as saying on Yonhap. “My goal is not to beat Iran by a big score, but to go to the World Cup with a win.”

But judging from Korea’s head-to-head record against Iran, the odds don’t look good. Korea has lost all three times it has faced Iran in the past two World Cup qualifying rounds. Shin knows that painful experience firsthand. When he played for Korea during the 1996 Asian Cup, the team suffered a huge 6-2 loss against Iran.

Shin believes the right amount of team morale will go a long way. Lee Dong-gook, who is joining the national team roster for the first time in almost three years, has echoed that sentiment, saying, “There are some players who are playing for themselves rather than the team. The players need to sacrifice more for each other.”

For the match against Iran and the final qualifier against Uzbekistan on Sept. 5, Shin has compiled a 26-man lineup, larger than usual.

“Even though we called up players early, we don’t have the full squad, so we won’t able to see the big work,” Shin said. “But we will build up our chemistry and organize our defense.”

To adjust to the playing time of 9 p.m., the players will be training at 6:30 p.m. every day. “If we follow the exact schedule of the match day, we should start training at 9 p.m., but that’s too late,” Shin said. “I worry that training so late will harm the players’ fitness level.”

On Saturday, the team will play a tune-up match against the Suwon Samsung Bluewings. The remaining 10 players, who are playing in foreign leagues outside Korea and China, will join the national team by Aug. 28.