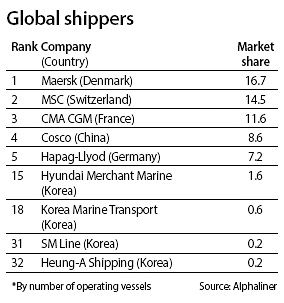 It was August last year when leading domestic shipper Hanjin Shipping fell into court receivership. A year has passed but Korea’s shipping industry is still struggling to ride out the storm that sunk its biggest player.

After Hanjin’s bankruptcy in February, Hyundai Merchant Marine (HMM) became the top Korean shipper, but its global market share is a mere 1.6 percent. Its share of the local market is dropping as well.

Korean shippers accounted for 34.2 percent of the shipping volume transferred through Busan’s ports last year, down from 38.1 percent the previous year. During the same period foreign shippers increased their share of the pie from 61.9 percent to 65.8 percent. This raised concerns among industry insiders that the domestic market may fall into the hands of foreign companies.

The shipping industry is bouncing back from a global slump this year, thanks to a growth in consumption and production activities in many parts of the world including the United States.

London-based Clarkson Research forecast that this year’s volume of marine transported goods will increase 2.3 percent year on year to 11.3 billion tons. On increased shipping volume, the daily usage fee for Panamax (the biggest vessels capable of passing through the Panama Canal) soared from $5,000 to $10,000.

The concern is that revenue from the improving market is likely to benefit other global shipping giants. In the shipping industry, companies that operate many regular lines are much more likely to secure more deals.

With the fall of Hanjin Shipping, once ranked seventh globally, the shipping sales network it had across 168 countries vanished into thin air, leaving local consignors with no choice but to turn to foreign shipping companies.

According PIERS, a U.S. provider of import and export data, HMM accounted for 5.7 percent of routes going in and out of the U.S. in the second quarter, half of the 10 percent share that domestic shippers held last year.

Shipping routes into the U.S. were dominated by international companies including China-based Cosco with 18.1 percent and Japan’s ocean Network Express with 16.5 percent. Both companies have gone through aggressive expansion in the last one to two years.

Domestic shippers are also trying to expand. On Aug. 8, 14 domestic shippers that run international lines including HMM, Korea Marine Transport and SM Line formed an alliance. The alliance, dubbed the Korea Shipowner’s Association, will study the Hanjin Shipping crisis to prevent its repetition.

The global trend for eco-friendly regulations may act in favor of Korean shippers. Starting from September 2019, every vessel traveling on international routes will be obliged to install a device that cleans ballast water.

From 2020, the percentage of sulfur oxides in oil-based fuel has to be below 0.5 percent. This means vessels will have to operate on liquefied natural gas or install a scrubber, a device that controls pollution.

These changes require investment worth several billion won per vessel.

“In the current situation where existing vessels have to be converted to abide to environmental regulations, big shippers may face bigger risks but for smaller companies like us, it may be an opportunity,” said Hyundai Merchant Marine CEO Yoo Chang-geun earlier this month in a press release.

President Moon Jae-in also acknowledged the importance of reviving the local shipping industry, having set it as one of his administration’s 100 national tasks. Developing technology for eco-friendly vessels, offering subsidies for abandoning old ships and promoting shippers that run container ships with a capacity of more than one million 20-foot-equivalent units (TEU) were among his goals.

Academics, however, say that companies and industry insiders should also push internal efforts for survival in hand with government support.

“Shippers, have to diversify their business portfolio to reduce risk from the industry cycle and develop services to increase their market share,” said Professor Yang Chang-ho of Incheon National University’s Graduate School of Logistics.

“The government should offer support based on strict principles when there’s systematic risk. For the effects of financial support to bear fruit, companies have to make business decisions with more responsibility and real concern that falling behind will eventually lead them to close down,” said Park Sang-in, professor of Seoul National University’s Graduate School of Public Administration.