LG Electronics announced Wednesday it will spend $25 million on a factory for advanced electric vehicle components in the U.S. state of Michigan.

The 250,000-square-foot facility in the Detroit suburb of Hazel Park will begin mass production of renewable battery packs in the first quarter of next year and expand into other EV components including motors for local carmakers. 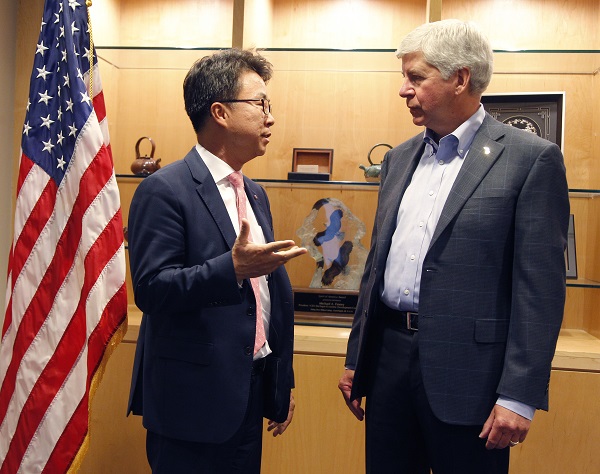 
“LG’s initiative to develop and produce world-class EV components in the United States represents a key pillar of our strategy to be the best technology partner to U.S. automakers,” said Ken Chang, senior vice president at LG Electronics USA.

The factory is a strategic move for LG given upbeat prospects for the U.S. EV market. Sales in the third biggest EV market in the world (after China and Europe) jumped 37 percent year on year last year, and the growth is expected to accelerate. Market researcher IHS Markit forecasts the U.S. EV market would see an annual average growth of 65.5 percent from this year through 2020.

Vehicle components are the fastest-growing business of Korea’s No. 2 consumer electronics producer. LG’s global revenues for vehicle components in the first half of this year were more than $1.5 billion, a 43 percent increase from the same period last year, thanks in large part to a successful collaboration with General Motors in the popular Chevrolet Bolt EV. LG has been supplying 11 different EV components for the GM EV sold in Korea.

The new plant is expected to contribute to creating almost 300 local jobs at the factory and engineering positions at the LG R&D Center in Troy, Michigan.
LG will receive hiring and training assistance from the state in cooperation with local community colleges and from the cities of Hazel Park and Troy.

“When leading global companies like LG invest in Michigan and create hundreds of good, high-paying jobs here, it speaks volumes about the strong business and mobility climate in the state today,” Michigan Governor Rick Snyder said. The factory project will be supported by a $2.9 million capital grant under the Michigan Business Development Program over the next four years.

The Michigan plant is the second facility LG has decided to build since the protectionist Donald Trump administration began earlier this year. The company announced a new $250 million factory for washing machines in Clarksville, Tennessee set for completion in 2019. Construction is also under way on an LG North American Headquarters in Englewood Cliffs, New Jersey. That is a $300-million project that is expected to double LG’s local employment to more than 1,000 by 2019.

LG Electronics has been banking on electric vehicle components to diversify its business away from home appliances.