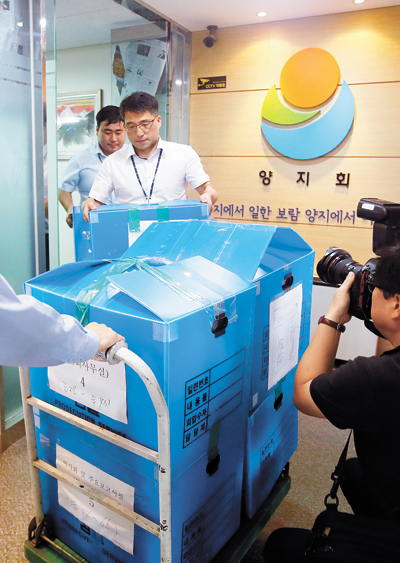 Investigators of the prosecution raid the office of Yangji Association, whose members are retired NIS officials, in Seocho District, Seoul, Wednesday. [YONHAP]

Prosecutors on Wednesday raided around 30 offices and homes of civil group officials suspected to have waged secret cyber operations under the command of the National Intelligence Service during the Lee Myung-bak government.

A special investigation team’s move to collect evidence suggests a full investigation by the Seoul Central District Prosecutors’ Office into the NIS’s alleged illegal mobilization of various civic groups in favor of the former Lee government to wage a cyber campaign for the former president. If proven correct, such an act would constitute a violation of the National Intelligence Service Act, which forbids it from meddling in domestic politics.

Among the raided offices are those of Yangji Association, whose members are retired NIS officials, and those of other civic groups known for their support of Lee.

The raid came just a day after the prosecutors announced they launched a special investigation to look at the NIS’s alleged interference in domestic politics between May 2009 and Dec. 2012, when Lee was in power.

On Aug. 3, the NIS’s special taskforce on the agency’s alleged cyber campaign announced that the NIS ran some 30 groups outside the agency, such as the Yangji Association, from 2009 to 2012 with the aim of advancing the Lee government’s agenda and helping then-candidate Park Geun-hye win the 2012 election, both of which constitute violations of the NIS Act.

In 2012 alone, it is revealed that the NIS paid 3 billion won ($2.64 million) in taxpayers’ money to these groups for their covert cyber campaigns.

The prosecutors are now analyzing confiscated computer hard drives and documents, while banning people involved in the case from leaving the country. Those suspected to have been implicated are soon to be summoned for questioning.

Since the raided civic groups were pro-Lee, former Lee administration officials could be called into questioning if evidence suggests they were involved, which would further corner the former president.

The timing of the raid, just one day after the team’s launch, is suggestive of the determination of Yoon Seok-yeol, head of the Seoul Central District Prosecutors’ Office, to get to the bottom of the NIS cyber campaign.

Yoon, who is leading the probe as head of the Seoul Central District Prosecutors’ Office, earned national fame in 2013 when he revealed that his investigation into illegal meddling by the National Intelligence Service in the 2012 presidential election had been hindered by his superiors.

Yoon’s remark came as a shock to the elite investigative body, as it values loyalty to the chain of command. For the next few years, Yoon was assigned to regional prosecutorial branches in an apparent series of demotions. He returned to the media spotlight last December, when he was called to work for independent counsel Park Young-soo, which wrapped up a 90-day probe by indicting former President Park on 13 counts of bribery and abuse of power.

He made yet another improbable comeback in May, when President Moon Jae-in appointed him to the top post at the Seoul Central District Prosecutors’ Office.