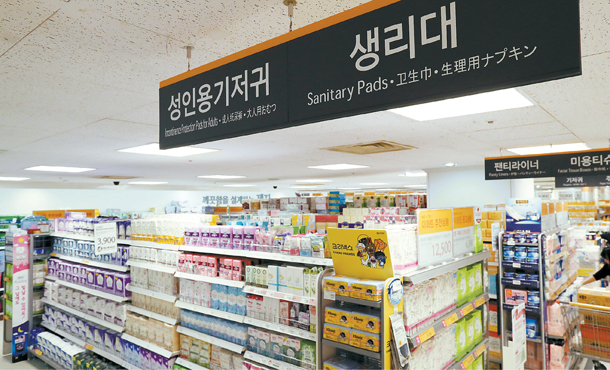 Sanitary pads on shelves at a major retail store in Seoul on Thursday. Retailers have been taking Lilian sanitary pads off the shelves after they has been found to contain substances that may affect women’s health. [YONHAP]

The dispute over Lilian sanitary pads is growing as consumers plan a class action against manufacturer Klean Nara and major retailers pull the product from their shelves.

As of Thursday afternoon, the number of members on the online community for possible Lilian victims surpassed 16,000. The community was set up on Monday by a local law firm to help consumers file a collective law suit for damage claims against Lilian’s manufacturer, Klean Nara.

One of the discussion boards on the community provided a space for members to discuss the negative health impacts they experienced after using the product, including reduced menstrual bleeding and painful cramps. Similar allegations against Lilian products have surfaced on online communities in the past.

Earlier this week, a pop-up message on Klean Nara’s official homepage said that the product’s safety has already been confirmed by the government. On Wednesday, however, it announced it would offer refunds to anyone who sent products back to the company’s headquarters starting on Monday.

The company requested a safety check from the Korea Consumer Agency last week, but explained on its website that it would offer refunds before the check as “reacting to consumer’s requests is of foremost importance and a responsible thing to do.”

In test results released March, the brand’s products were revealed to let out more volatile organic compounds, known as VOCs, compared to other domestic products. VOCs are substances that are naturally released from the product at room temperature, some of which can be harmful to the body.

Amid the confusion, the Korean Women’s Environmental Network released results for a case analysis of 3,009 consumers who reported health issues after using Lilian’s sanitary pads. The results were that six among 10 respondents experienced a change in their menstrual cycle; 85.8 percent of whom experienced reduced menstrual bleeding while 68 percent experienced worsened cramps.

It was in the Korean Women’s Environmental Network’s open discussion in March that the data on Korean sanitary pad’s VOC content was first released. Lilian topped the list. The association added that research on chemicals inside sanitary pads should be enforced.

To relieve consumer sentiment, the Ministry of Food and Drug Safety announced that it would perform the substance test on Lilian products earlier than initially planned, and promised to investigate the top five sanitary pad manufacturers, which account for 90 percent of local consumption.