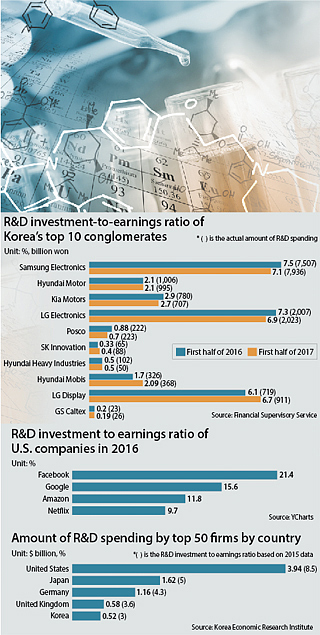 The nation’s top 10 conglomerates have cut spending in research and development as a percentage of revenue, according to an exclusive analysis by the JoongAng Ilbo on Monday last week, which some worry may hamstring Korean competitiveness.

For the first half of this year, R&D intensity, or investment as a percentage of revenue, shrank in five of the top 10 conglomerates: Samsung Electronics, LG Electronics, Posco, Kia Motors and GS Caltex.

Samsung Electronics spent the most, injecting over 7.94 trillion won in R&D. But while R&D accounted for 7.5 percent of earnings last year, this shrank to 7.1 percent during the first half of this year. Even in yearly figures, R&D intensity has decreased from 7.4 percent in 2015 to 7.3 percent last year.

Hyundai Motor and affiliated Kia Motors spent 1.7 trillion won in R&D during the first half, roughly 2.3 percent of their revenue, whereas German Volkwagen’s R&D intensity was 6.3 percent and Japanese Toyota’s was 3.8 percent.

Industry insiders point to tough market conditions in large consumer markets like the United States and China as reasons why Korean automakers spent less on R&D this year. But more concerning is that these R&D investments are rarely turning into assets.

Only 2.5 percent of Samsung’s R&D spending turned into assets during the first half of this year. Last year, that figure was 5.9 percent. Hyundai Motor and Posco are seeing the same decline.

Meanwhile, competing countries like the United States, Japan and Germany are moving in the opposite direction.

According to a recent report from the Korea Economic Research Institute on the R&D spending compared of the top 50 companies in each country, Korean companies spent on average $519.1 million in R&D in 2015, while the United States spent over $3.9 billion the same year, Japan spent $1.6 billion, Germany $1.16 billion and the United Kingdom $584.2 million.

Moreover, the already large gap is expected to widen. According to a recent analysis by Japanese newspaper Nikkei on this year’s R&D budget of 268 major companies in the country, 40 percent were found to have allocated their largest-ever R&D budgets.

Considering the nation’s top 10 companies spent roughly 13 trillion won together during the first half of the year, there’s no chance they will be able to beat Japan’s three automakers in terms of R&D, even if they spend the same amount during the latter half of the year.

Still, the Korean government is not encouraging conglomerates to expand on R&D spending. According to the government’s tax reform plan, released earlier this month, while a 1 to 3 percent tax deduction was formerly granted to R&D investments, this will be cut by 1 percentage point. If a company has been spending 7 percent of its 100 trillion won revenue on R&D, for example, the amount of tax credit will be slashed from 670 billion won to 620 billion won.

Normally, funds for social welfare need to be collected via taxes from the public. As the Moon Jae-in administration announced it will raise the minimum wage and expand pensions and funding for households with young children, the government needs to collect more taxes. Critics say the government is aiming to do this by taking money allocated to corporate R&D support, which adds up to roughly 38.93 trillion won per year based on 2015 numbers.

“The previous administration tried to shrink tax deduction on conglomerates’ R&D investments to fill national coffers,” said Lee Tae-kyu, a research fellow from Korea Economic Research Institute. “The new administration is taking on that same scheme and it is demotivating companies from expanding R&D expenditure.”

“It would be awkward for the new administration to emphasize creating more jobs while reducing incentives for R&D investments,” said Lee from the Korea Economic Research Institute. “[Government] must come with an ingenious plan to encourage R&D spending to build for future cash-cow industries.”

Some also show concern about the government increasing its own budget for R&D projects while cutting tax benefits on R&D in the private sector.

“As government officials are closely monitored by the Board of Audit and Inspection of Korea, they tend to invest in projects that are likely to succeed over projects that actually need investment,” said Hwang In-hak, senior analyst from Korea Business Law Institute. “Just as soccer balls are meant for soccer players, R&D support should be given to actual business players.”