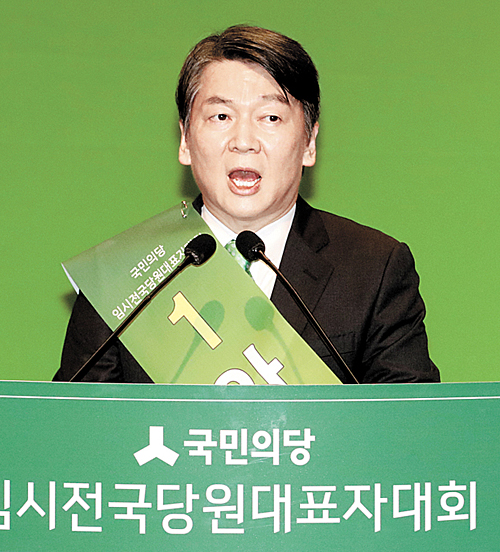 Ahn Cheol-soo gives an acceptance speech after being elected chairman of the People’s Party at a party convention in the National Assembly on Sunday. [YONHAP]

Ahn Cheol-soo was elected chairman of the People’s Party at a convention Sunday, making a political comeback of sorts 110 days after his crushing defeat in the presidential election.

Ahn, a co-founder of the party with 40 seats in the National Assembly, will try to lift the party’s single digit approval rating ahead of a local election less than a year away.

Ahn clinched the victory by winning 51.09 percent of the votes, or 29,095, far ahead of challengers Rep. Chung Dong-young, who received 28.36 percent of votes and Rep. Chun Jung-bae with 16.6 percent. Rep. Lee Un-ju, the only female candidate, came in last with a meager 3.95 percent.

The software mogul-turned-politician’s victory underscored that despite a political career defined by setbacks - failed candidacies in two presidential elections and an embarrassing illegal smear campaign scheme by his party against Moon Jae-in in the most recent one - he still has considerable power in the party he co-founded in January 2016. In his acceptance speech at the convention held at the National Assembly, he likened his election to a resurrection.

“You have given me a political life again so that I could be back with the people,” said Ahn, apparently referring to his May 9 election loss in which he came in third with a near 20-percent gap with victor Moon. “I will not disappoint you again.”

Emphasizing the importance of local elections scheduled for next June, the new chairman asked for public support so that a multi-party system could continue.

“If we lose in the local elections next year, our People’s Party will be dissolved, leading to the revival of a two-party system based on vested interests,” Ahn said. “The old-fashioned politics of collusion and detrimental symbiotic partnership [between the ruling and opposition] will be back in play.”

Ahn said the People’s Party under his leadership act as an opposition party keeping the government and ruling party in check, saying they had already displaced signs of arrogance and self-righteousness.

“Such arrogance and self-righteous [behavior] will worsen over time because that is the nature of power. Keeping power in check is the number one priority the people have for an opposition party like us.”

Ahn’s taking helm of the country’s third largest party comes amid a heightened sense of alarm and urgency within party members in the aftermath of the fake audio tape scandal that plummeted the party’s approval rating.

Since the party was implicated in a smear campaign against Moon involving a bogus recording in late June, its approval rating has remained in a 5 percent range, while the ruling Democratic Party is enjoying 50-pecent popularity. Moon’s approval rating has never dropped below the 70-percent mark since he took office on May 10.

It was initially thought Ahn would not run for party chairman since he said on July 12 that he would spend some time in “self-reflection” to take responsibility for the smear campaign scandal.

But Ahn registered his bid shortly after, saying he could not stand idly watching the party he co-founded decline. Ahn’s next big test will surely be on June 13, 2018 when the local election will be held. If the party fails to score major victories in mayoral and gubernatorial elections, his leadership will be dealt a serious blow.