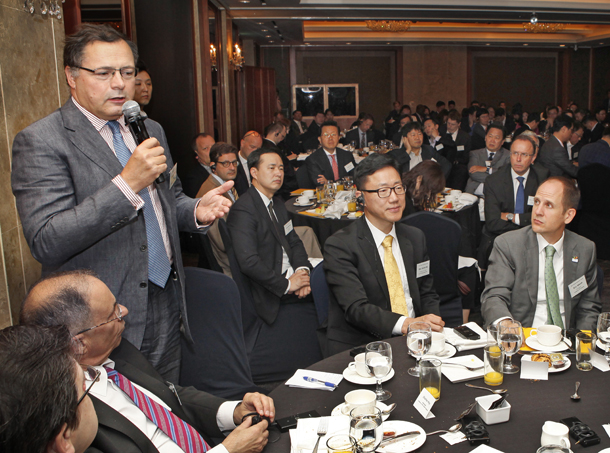 “We see ‘inclusive finance’ as an important policy agenda for the future,” said Choi Jong-ku, the chairman of the Financial Services Commission (FSC), in front of about 110 dignitaries - including business leaders and ambassadors - during his keynote speech at the Korea Economic Forum on Wednesday hosted by the Korea JoongAng Daily at the Lotte Hotel Seoul. “What we are aiming for is cultivating a financial environment of living together.”

“I think chairman Choi provided a lucid insight into the changes we can expect as we shift from a conservative government for the past nine years to a liberal government,” said Hwang of the Korea Financial Investment Association.

The FSC head explained that under the Moon Jae-in administration, financial policy will focus on accommodating the needs of all people and hoped that “the benefits of financial services will spread around even to the previously un-served people.”

Choi also mentioned the government’s intention to help not only Korean financial companies to expand overseas, but also to lower the barrier for foreign companies to enter the local market. 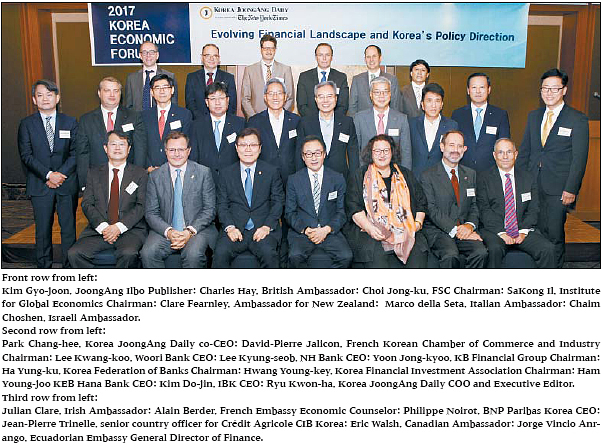 Hay was one of eight ambassadors that represented their respective countries at Wednesday’s forum. Other representatives included James Choi, the Australian ambassador, Eric Walsh, the Canadian ambassador and Maro della Seta, the Italian Ambassador.

Choi also hinted at the government’s intention to impose deregulation when necessary, offering a positive outlook to leaders of non-financial industries on their business in Korea as well.

“We are going to act boldly to simplify needlessly cumbersome regulations and give more leeway or discretion to financial institutions as well,” the FSC chair said.

“I think the new FSC chairman has a balanced perspective on the economic market,” said Jung Jae-hee, the chief executive officer of Ford Sales and Service Korea. “I think he also has a positive point of view about deregulation. From the position of industries [other than finance], such policy regulation would be helpful for us to do business.”

Other business leaders also expressed their confidence in the new head of the FSC.

“We are very interested [about the financial market dynamics in Korea],” said Bernd Gehlen, Vice President and Head of Corporate Service Unit at BASF Korea. “Even for companies in production, we are all impacted by the financial environment.”

“It was very impressive how he described [the policy direction for financial markets by the government] and the three main themes he has given was very convincing,” Gehlen added. “I think he knows what he is doing.”