Ex-spy chief is sentenced to four years in retrial

Ex-spy chief is sentenced to four years in retrial 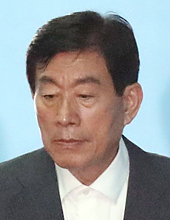 A former head of the country’s main intelligence agency was convicted in a retrial on Wednesday for running political operations to help Park Geun-hye win the 2012 presidential election.

The Seoul High Court on Wednesday found Won Sei-hoon, who headed the National Intelligence Service (NIS) from 2009 to 2013, guilty of violating the law governing the spy agency and elections. He was sentenced to four years in prison.

Immediately after the sentencing, Won, who has been on bail, was sent to jail.

Instead of ending the spy agency’s tradition of running domestic political operations, Won actually emboldened it during his time at the NIS, the court said.

“The defendants supported and praised the president and the ruling party and opposed and slandered the opposition parties,” the court said. “Systemic acts of crimes were repeated on a daily basis.”

It added, “We have never seen a state institution systemically interfere in politics and elections for such a long time, and this invites serious criticism.”

The retrial at the high court, however, did not end the prolonged legal battle as Won’s lawyer, Bae Ho-geun, said his client will appeal to the Supreme Court.

Won was prosecuted in June 2013 on charges of running an online smear campaign against Moon Jae-in, the main rival of Park in the 2012 presidential election. Park won by a slim margin, triggering questions about the fairness of the outcome.

Over the past four years, Won’s case went through the Seoul Central District Court, Seoul High Court, Supreme Court and then returned to the high court. The Supreme Court overturned the lower court’s conviction in July 2015, questioning the validity of some of the prosecution’s evidence and saying the previous ruling should be reconsidered accordingly.

The retrial continued for two years at the Seoul High Court. Last month, the prosecution introduced new evidence such as transcripts of meetings at the agency discussing domestic political operations and the verdict and sentencing were announced on Wednesday.

In the initial trial, Won was convicted of violating the law governing the NIS, but acquitted of the election law violation. He was sentenced to a suspended prison term of two years and six months. The Seoul High Court, however, convicted him of both charges and sentenced him to three years in February 2015.

In the retrial ordered by the Supreme Court, the high court once again convicted him of both charges and handed down a four-year jail term.

The court also ruled that Won was guilty of the NIS’s operation of “public opinion brigades” comprised of civilians who post online comments slandering liberal politicians and presidential contenders. The court said Won did not issue direct orders to the brigades, but he would have known what they would do.

While the trial was proceeding, Park was impeached and removed from office. Moon was elected and took office in May, and the NIS, under new leadership, conducted an internal probe into Won’s cyber smear campaign against Moon.