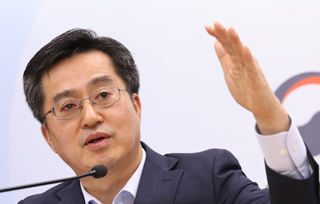 The Moon Jae-in administration’s prime task is a complete and thorough eradication of longstanding evils. There cannot be any objection to cleaning up the bad practices of the past. However, there are some things that are not evil but are not easily found lately. I’m thinking of terms like balanced finance, restructuring, globalism and growth.

Balanced finance has long disappeared and only exists in memory, and restructuring is not the focus as the government focuses instead on inclusive growth. Also, the government does mention but does not highlight globalism and growth.

Balanced finance was the key task in the later days of the Lee Myung-bak administration. In his Aug. 15 address in 2011, Lee proposed the goal of balanced finances by 2013. He pledged to fill the holes in the state treasury made in the course of responding to the global financial crisis.

He was eager to package the fiscal report of the administration. As he defined balanced finance as a presidential agenda, there were excessive attempts to achieve his goal. Frugal finances hurt the operation of public corporations mobilized for state projects, such as the Four Rivers Project. The dogma of balanced finances resulted in a slack response to the market. That was the end of balanced finances. The Park Geun-hye administration issued up to 40 trillion won ($35.5 billion) in deficit-financing bonds every year. While many were issued to pay back existing debts, we were in the red, with more spending than tax revenue.

Next year’s budget is expected to result in 30 trillion won in deficit. It is unusual to see a spending rate higher than an economic growth rate during a financial crisis. Spending is set, but tax revenue is projected. Spending is cash, and tax revenue is made up of promissory notes. If the notes are not honored, fiscal deficit and state debt will increase.

Of course, balanced finances alone is not a noble value. If necessary, government financing should extinguish the fire or work as a water primer despite deficit. However, this is not sustainable. State financing is not much different from household financing. If you spend more than you earn, things will break in the end. Past administrations set the goal of balanced finance after overcoming crises and recovering economic vitality. The current administration has yet to define when to stop the role of priming water and seek balanced finance. It is either not sure or unwilling. Former National Assembly Budget Office head Shin Hae-ryong criticized the practice of resolving all issues with government finance as “fiscal alcoholism.”

Restructuring is no longer discussed actively. Has the economy improved? Not for sure. According to the Korea Chamber of Commerce, the operational income of the listed companies in the second quarter increased by 17 percent, but when the top ten groups are excluded, it fell by more than 20 percent. The actual economy is still struggling when you remove this illusion from thriving industries, such as semiconductors.

As the country successfully attained power and change through its candlelight protests and a snap election, our sense of crisis may have become insensitive. We need to be wary that the new administration’s priority is on the people, because jobs and welfare excessively fan people’s expectations. It is important to nurture an innovative ecosystem of small, medium and venture companies.

Korea is a small open economy influenced by external factors. Policies should not only address domestic interested parties but reflect global perspectives. A former minister of the previous administration said that the new administration may lack global perspective. The corporate tax increase is going against the global trend, and the income-driven growth is a unique one. Of course, the external balance is still strong. But our global antenna should be up 24 hours a day. The late Kim Ik-joo, who was head of the International Finance Center, once wrote in a 2013 column in the JoongAng Ilbo, “No one knows when, where or how sparks may spread. A crisis could be contagious regardless how reasonably one behaves.”