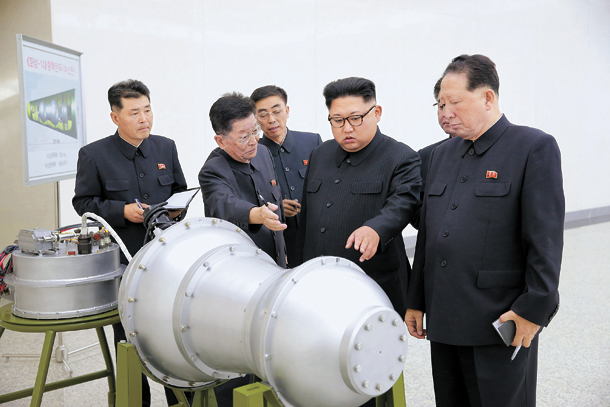 North Korean leader Kim Jong-un, second from right up front, reportedly inspecting the loading of a hydrogen bomb onto a new intercontinental ballistic missile, according to North Korea’s state media, a claim that some outside experts doubt but one that intensifies already high levels of concern on the Korean Peninsula. [AP/YONHAP]

North Korea carried out its sixth and most powerful nuclear test on Sunday, claiming to have detonated a hydrogen bomb that can be loaded onto an intercontinental ballistic missile (ICBM).

South Korea’s Joint Chiefs of Staff said it detected a 5.7 “artificial tremor” that originated from North Korea’s Punggye-ri Nuclear Test Site in Kilju County, North Hamgyong Province, at 12:29 p.m., after which the Blue House confirmed it was a nuclear test.

Neither the presidential office nor the military mentioned whether it was a hydrogen bomb.

The United States Geological Survey (USGS) and China’s Network Earthquake Center measured the magnitude of the event at 6.3. North Korea has yet to relay a corresponding figure.

The Chinese agency said it detected a second, 4.6-magnitude earthquake eight minutes after the first one near the site of the first explosion. The USGS said the second event was “significantly smaller” and likely a “secondary feature (possibly a structural collapse) associated with the larger event.”

South Korea’s Korea Meteorological Administration said it did not detect the second event.

The administration, placing the first event at a magnitude of 5.7, said it was five to six times larger than North Korea’s fifth nuclear test on Sept. 9, 2016, and 11.8 times more powerful than its fourth on Jan. 6 of the same year.

The South Korean Joint Chiefs of Staff estimated North Korea's latest test to have had a yield between 50 and 160 kilotons, the strongest to date. A yield of 1 kiloton is equivalent to the force of 1,000 tons of TNT.

Military troops across the nation were put on high alert, while a National Security Council meeting was held at the Blue House at 1:30 p.m. for 90 minutes on the order of President Moon Jae-in. Chung Eui-yong, head of the council, talked on the phone twice on Sunday with his American counterpart, H.R. McMaster.

Chung later told local reporters that the administration has agreed to devise the “strongest level of punishment” against the regime, with the help of the international community. The diplomatic effort, Chung said, includes new United Nations Security Council measures that will lead to North Korea’s “irreversible” abandonment of its nuclear weapons and missile programs, as well as the country’s “absolute isolation.”

Hailing the ironclad alliance between South Korea and the United States, Chung said his council also vowed to discuss the deployment of U.S. strategic assets to South Korea, without explaining what those weapons might be.

On his conversation with McMaster, Chung said both sides agreed to have each of their presidents speak with one another over the phone in the near future in order to lay out a “powerful way to cooperate” against North Korean provocations.

Cho June-hyuck, spokesman of South Korea’s Foreign Affairs Ministry, said Seoul’s mission to the United Nations would discuss with its American and Japanese counterparts to request an urgent UN Security Council meeting to be held “as soon as possible,” saying Seoul would push for stronger sanctions against Pyongyang.

The North’s staunchest ally, China, was hosting the annual summit of Brics - comprising Brazil, Russia, India, China and South Africa - when the nuclear detonation occurred, and said it “strongly condemned” the test.

Japan’s Foreign Minister Taro Kono said Tokyo “condemned North Korea in the strongest language” via the Japanese Embassy in Beijing, according to The Japan Times.

Defense Minister Istunori Onodera of Japan was quoted as saying that his ministry dispatched T-4 trainer jets equipped with dust collectors to detect traces of radiation, adding that the estimated magnitude suggests a scale that far exceeds previous explosions.

The date of the visit was not given, but an English version of the report said that the hydrogen bomb, which has an explosive power “adjustable from tens kiloton to hundreds kiloton,” was a “multi-functional thermonuclear nuke with great destructive power which can be detonated even at high altitudes for super-powerful EMP [electromagnetic pulse] attack according to strategic goals.”

The report added that Kim stressed the need for the institute’s scientists to “dynamically conduct the campaign for successfully concluding the final-stage research and development for perfecting the state nuclear force.”

On Sunday morning before the nuclear test, Prime Minister Shinzo Abe of Japan had a 20 minute telephone call with U.S. President Donald Trump, in which the two leaders agreed to “further step up pressure” on Pyongyang, Abe was quoted as telling Japanese reporters by The Japan Times.

“We completely agreed that we must thoroughly coordinate with each other and with South Korea,” Abe reportedly said, “and cooperate closely with the international community, to increase pressure on North Korea and make it change its policies.”

The recent test is a critical blow for Moon, whose dialogue proposals to Pyongyang have been completely ignored. On Friday, he and Trump held a 40-minute telephone conversation in response to North Korea’s missile test last Tuesday, in which the two agreed to enhance South Korea’s missile defense capabilities while stressing the need to bring Pyongyang back to the negotiation table.

Blue House spokesman Park Soo-hyun, who described their conversation to local reporters on Saturday, said Moon and Trump also agreed “in principle” to revise the bilateral missile guideline to the extent Seoul wishes, but did not give further details.

The current guideline prohibits South Korea from developing ballistic missiles with a range of over 800 kilometers (497 miles) and a payload exceeding 500 kilograms (1,102 pounds). Seoul is seeking to revise it, reportedly with an aim to double the warhead weight limit.

North Korea has held six nuclear tests since 2006, the most previous on Sept. 9, 2016, when it was suspected to have detonated a bomb with a 10 kiloton yield.

The regime was suspected to have carried out another test around this time since Sept. 9 is when it celebrates its foundation day. Last Tuesday, it fired a Hwasong-12 intermediate-range ballistic missile that flew over Japan.