A section within the “Moomin Original Artworks Exhibition,” which opened on Sept. 1 and will run through Nov. 26. The exhibition features over 350 original works by the creator of the Moomin series, including some that have never been displayed outside of Finland. [YOON SO-YEON]

Chubby and round trolls with short limbs, large snouts and big blue eyes - the Moomin family and their friends live in a peaceful corner of Moominvalley, venturing their way through hardship with love and friendship. This autumn the Moomin characters, loved by generations of children across the world, have travelled from their tranquil valley to the Hangaram Art Museum in Seoul Arts Center, southern Seoul, for the “Moomin Original Artworks Exhibition” which will be held through Nov. 26. 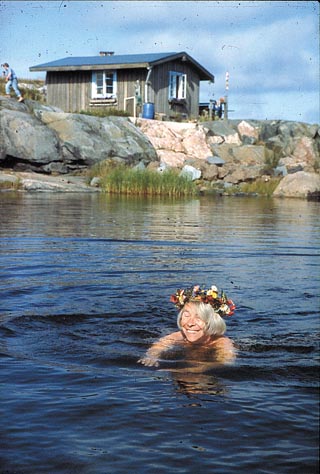 Tove Jansson (1914-2001) used to live on a secluded island with her partner “with no electricity and no running water,” said Sophia Jansson, her niece, “but she was very happy there. She was very close to nature, very peaceful.” [SEOUL ART CENTER]

The first of the Moomin series, “The Moomins and the Great Flood,” was published in 1945 and written and illustrated by Tove Jansson (1914-2001), a Finnish-Swedish artist. It has been over 65 years since the story of the lovable troll was first translated into English in 1952, fueling the characters’ popularity outside of their European birthplace.

The Korean translations were first published by Hangilsa in 1997. The series was then revised and released by Jakkajungsin in 2010.

Despite their long history in Korea, it wasn’t until 2014 that the cute round trolls really started to gain popularity here. There are over 200,000 Instagram posts with the hashtag Moomin in hangul, showing the series’ popularity in the country.

As this year marks the 100th anniversary of the Finnish Declaration of Independence in 1918, it adds a meaningful touch to the opening of the exhibition, co-organized by the Finnish Embassy.

The exhibition has seven sections, including content that shows the series’ creation, cartoon versions, paintings by Tove Jansson and more diverse experiences such as moving animations.

“The Moomins have been around me since the day I was born,” said Sophia Jansson, niece of Tove Jansson and president of Oy Moomin Characters, the copyright owner of the Moomin characters. The Moomins were said to have been created for young Sophia Jansson by the unwed artist who loved her niece dearly, and Sophia Jansson grew up with the creatures.

In an interview with the Korea JoongAng Daily on Sept. 1, the opening day of the exhibition, Jansson expressed her admiration and adoration towards her aunt and the exhibition of her works. 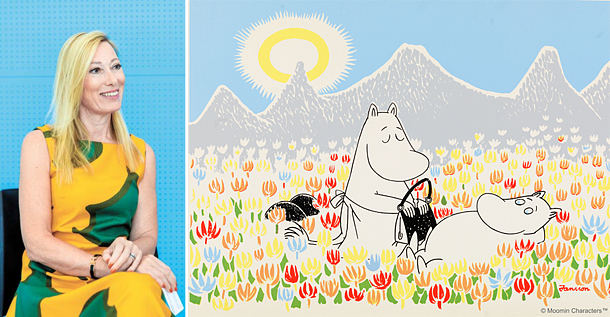 Left: Sophia Jansson, niece of Tove Jansson and president of Oy Moomin Characters. Right: A campaign poster painted by Tove Jansson is on display at the museum. [SEOUL ART CENTER]

“She was a very nice and warm person,” said Jansson. “Because she became quite famous during her lifetime, I think she had a different public persona, than at home, privately. But that’s very usual for people who have to be in the public eye. So I mean, on the whole, I think she was very unique as a person.”

The Moomins was conceived during the World War II, then came into being shortly after the war ended. Although Tove Jansson is best remembered for her friendly characters, her artistic career actually started out with critical comic strips or short drawings that drew more on the darkest side of society, expressed through her earlier depictions of trolls - darker, skinnier and gloomier.

Yet, just as Finland battled through the dark days during the war, the Moomins fight their way through hardships, not with violence or force, but with love and friendship. “The Moomin universe that she created is really more founded on humane values, about life,” said Jansson. “And I think she was striving to describe, in her stories, maybe a fantasy of what society could look like, rather than what had happened during the war.

“The reason I think people are still interested in the Moomins and the Moomin stories today, is because they are about things that touch you no matter what age you are, what nationality you are, what grade you are in. And the stories are essentially about furthering values that are us living in peace and harmony. Sadly, if you look around you in the world, we still need that. We still need to be told that.”

Don’t be deceived by the big innocent eyes and the huggable physique, as the trolls and their friends offer an insight into the world that resonates differently with many people. It may seem easy to understand at first sight, but the simple words take on different meanings for readers. “For if you’re not afraid how can you be really brave?” “I do not understand why the heroine in the book is always prettier than the one at home,” and “One can never be truly free if one admires others too much” are just some of the more philosophical points that Tove Jansson made through her characters’ voices.

“We find that, in society, there is a much smaller portion … that actually reads, and reads children’s literature, and that read children’s literature in translation. So it’s easier for a broader group of people to come in contact with the Moomins through merchandise,” said Sophia Jansson. “I think it’s a fantastic opportunity for the fans who don’t really know about the Moomins to come and see a more broad exposition of her art history, and to really realize that each small illustration is a [piece of] artwork in itself.”