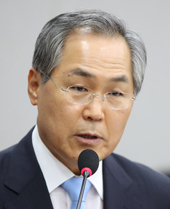 The lawyer-turned-politician has been serving in the parliamentary post since last year.

The former lawmaker of the ruling Democratic Party has a doctorate degree in political science from Russia’s Saint Petersburg State University.

Moon’s nomination of Woo as the new chief of the South Korean mission in Moscow comes one day before the South Korean president is set to head to Russia’s Vladivostok for a regional forum and a bilateral summit with Russian President Vladimir Putin.