Jeong Ji-hoon, a lawyer in Seoul, looks through the location-based application called “Somoim” on his iPhone. The app shows a list of small gatherings he can attend near his home to quickly grab dinner and drinks before heading home. [PARK SANG-MOON]

After graduating from a law school in Daegu, Jeong Ji-hoon, 33, finally landed a job in a law firm in central Seoul early this year. While living in Daegu and devoting himself only to studying, away from his family and friends in Seoul, Jeong says he gradually lost touch with many of his friends. After returning to Seoul, he got himself a studio apartment near Seoul Station, where he can commute to work on foot. He imagined that he could quickly make friends in his new neighborhood or at work. But it turned out to be more difficult than he expected.

“I’ve realized that when you are living alone and you’ve reached an age where many of your friends already have families of their own, it is difficult to meet up with your old friends after work or on the weekend,” said Jeong. “Also, if you have a job that often finishes late, it’s not easy to find a friend who you can meet for a quick beer or two in your neighborhood, let alone making new friends who live close to your place or work.”

After ardent research into how young Koreans meet other people these days, Jeong encountered an application called “Somoim,” which is Korean for “small group,” and he quickly downloaded it to his iPhone.

Somoim is a location-based social networking app which allows users to access small groups that have formed offline, based on a location they enter - typically the area where they live or work - when creating an account. The app prohibits users from changing the selected location for one month in order to gather people who really live or work in the selected locations. When joining, users are asked to select activities that interest them such as “reading,” “drinking,” “leisure,” “travel,” and so on. 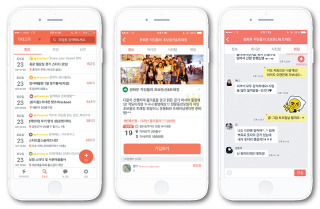 Somoim is a location-based application that offers a list of small group gatherings that have been organized around your location that cater to interests like “dining together,” “weekend getaway” and more. [SOMOIM]

When Jeong unexpectedly gets off work “early, like around 7 p.m.,” he says he logs on to Somoim to see what kind of gatherings have formed that evening. If he sees one that interests him, he joins the group, introduces himself online, and heads to the offline meeting point nearby. If he enjoys himself, he can stay as a member and regularly meet up with the group whenever he can. If he didn’t like the gathering, he can simply leave the group.

Last week, he was unusually free at work, so opened up the app and joined three groups that simply visit good restaurants in the neighborhood. On Saturdays, he meets up with a group that does cultural activities together, such as going to Daehagno to watch a play, and on Sunday afternoons, he meets a group that eats together close to his place.

“I find it really convenient because there are no strings attached,” he said. “When I encounter situations where I have to work late and can’t make it to the appointment I made with my friends, I feel so sorry and get stressed because I have to listen to my friends nag about how busy I am or how I’m always late. Plus, the members at each gathering pay the bills separately, which is another charm.”

Jeong thinks it is also safe for women to join since many small group leaders, at least in the ones he has joined, are very strict about kicking out those who make others uncomfortable.

“When I first [joined] an offline group, the operator asked me to show him my identification card to confirm that I didn’t lie about my status,” said Jeong. “Another group shared name cards.”

At the same time, those living solo also seem to be looking for ways to enjoy the company of others, on their own terms. Psychologists and neuroscientists insist that feeling lonely is part of human nature and that human beings are social animals who pursue communal living and want to form relationships with other people. But due to the difficulties they face in modern life, young Koreans are turning to form lighter relationships that are free from any demands or responsibilities.

“What is important is having a balance,” said Kwak Keum-joo, a psychology professor at Seoul National University. “People need time to be alone. They also need time to be with friends and families they are deeply involved with. It doesn’t hurt to form lighter relationships with strangers via social media as long as they are safe. I see the trend of young Koreans looking to enjoy company with others as a positive.”