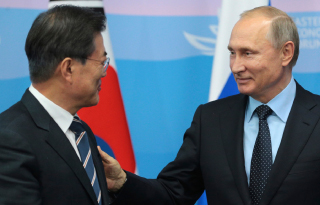 In university, President Moon Jae-in wanted to study history in hopes of becoming a historian rather than an attorney. Even after he became a lawyer, he thought about becoming an amateur historian once he was free from making money.

Moon often cries over movies. It is known that he cried after watching “A Taxi Driver,” “Masquerade” and “Ode to My Father.” He is said to have cried for five minutes after watching “Masquerade” in 2012. On Facebook, he wrote, “The face of President Roh Moo-hyun came across my mind. It is the first time that I cried out of control. I was heartbroken.”

Moon also cries when he hears stories about people struggling. During his 2012 presidential campaign, he took off his glasses and wiped away tears while talking to fired workers at SsangYong Motor. Families of the workers offered him tissues.

In general, Moon is a man of pride and principle. At the same time, though, he is internally sentimental and emotional. It seems he adhered to dialogue in his North Korea policy out of the sentimental hope that Kim Jong-un might be persuaded.

There is another reason for Moon’s emphasis on talks. It is his core supporters. A foreign policy and security aide said that Moon did not immediately execute deployment of the Terminal High Altitude Area Defense antimissile system because he cared about his core supporters. It is not easy for him to ignore their demands on the North Korea issue.

Moon’s core supporters were the main protesters during the anti-Park Geun-hye rallies and the force backing the current administration. It is not easy to ignore their demands as a politician. Moon calls liberal writer Rhee Young-hee one of his influences and was arrested for participating in protests against the military regime in the 1980s. Considering such a political background, it makes more sense to pursue dialogue than pressure. As expected, Moon has advocated dialogue with North Korea and is willing to visit Pyongyang if the North wants to talk.

But after North Korea’s sixth nuclear test on Sunday, he doesn’t seem as attached to talks. In an interview with Russian media on Tuesday, he said, “I will not avoid any level of dialogue if it can resolve the North Korean nuclear issue. But now is the time to denounce and pressure, not talk.” It was meaningful that Moon said the time was not right to talk. In fact, his North Korea policy direction has been shifting from talks to sanctions and pressure after the nuclear test.

Important things will happen from now on. North Korea is almost becoming a nuclear state. The National Intelligence Service has predicted that North Korea will threaten the United States by launching an intercontinental ballistic missile in a normal trajectory and targeting Alaska. It is about time for Moon to become more determined. His innate sentiment should remain inside.

Moon must give up hope that he can talk Kim out of this mess. Unlike Moon, Kim does not consider the nuclear issue a topic that’s on the table in inter-Korean talks. Moon should also keep in mind that his administration’s emphasis on talks may have allowed Kim’s reckless nuclear drive.

It is about time that Moon care less about his core supporters. If he cannot ignore the supporters who expect communication with the president, he must persuade them. Now is the time for him to pressure Kim to a frightening level. After Sunday’s nuclear test, President Donald Trump tweeted, “South Korea is finding, as I have told them, that their talk of appeasement with North Korea will not work, they only understand one thing!”

It is refreshing that the South Korean defense minister, Song Young-moo, has insisted on the need to reconsider deploying tactical nuclear weapons from the United States. The prospect of South Korea becoming a nuclear colony of the North is terrifying.

*The author is deputy political news editor of the JoongAng Ilbo.