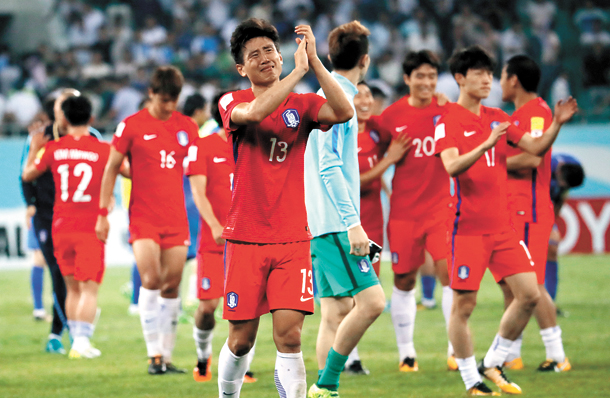 The Korean national football team, led by head coach Shin Tae-yong, celebrates after finalizing its advancement onto the 2018 FIFA World Cup in Russia after playing a scoreless draw against Uzbekistan in the final FIFA World Cup qualification match at Bundyodkor Stadium in Tashkent on Sept. 5. [YONHAP]

Korean footballers who helped the national team qualify for the 2018 FIFA World Cup will get special bonuses later this month for their achievement, an official with the Korea Football Association (KFA) said Saturday.

Korea, led by head coach Shin Tae-yong, secured the country’s presence at the 2018 World Cup after they played to a scoreless draw with Uzbekistan in Tashkent on Tuesday. The Taeguk Warriors also ensured their ninth consecutive World Cup appearance with the latest result.

The KFA official said the national football governing body will soon hold a board meeting to determine special bonuses for national team players and the coaching staff.

Sources said around 2 billion won ($1.77 million) is expected to be given to the national squad. Any player who received a national team call-up at least once during the final World Cup qualifying round is eligible for the bonus payment.

As a reward for 2014 World Cup qualification, the national players were divided into four groups according to their contribution to the campaign, and the KFA paid the top-rated players 100 million won each, with the second group earning 80 million won. Players in the third group got 60 million won, while the rest received 40 million won.

Considering the number of his national team call-ups and his total playing time, Tottenham Hotspur attacker Son Heung-min is likely to receive the top rating from the KFA, along with Swansea City midfielder Ki Sung-yueng.

Son didn’t play in Korea’s World Cup qualifier against China due to his accumulated yellow cards but played full time in most of the final round matches.

Ki, who has been the team captain since Uli Stielike’s management of the national side, missed Korea’s last two World Cup qualifying matches against Iran and Uzbekistan due to injury, but he also put in many 90-minute performances.

If the same bonus standards from 2014 are applied this year, Korea head coach Shin would get 150 million won, though it’s unsure whether he will indeed get that amount since the 46-year-old has only coached two national team matches. Shin was appointed as the national team manager in July after Stielike was sacked.

“The bonuses will be paid under rules regarding the use of money given by FIFA for World Cup qualification,” a KFA official said. “In 2002, all players were given equal bonuses, but since then, players have been paid according to their contribution levels.”