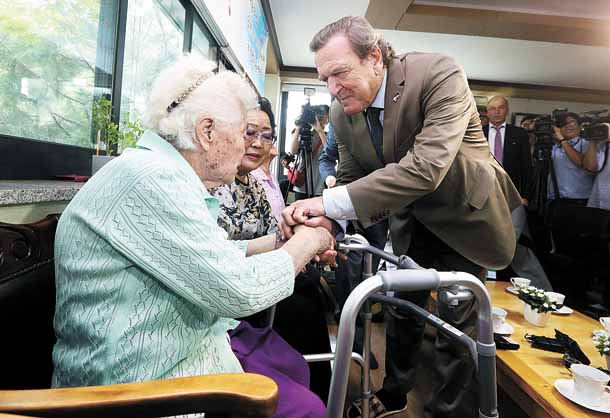 Former Chancellor of Germany Gerhard Schroder holds hands with Lee Ok-sun, a victim of Japanese wartime sexual slavery, at a center for the survivors in Gyeonggi on Monday. [YONHAP]

Schroder presented the House of Sharing with framed photos of Anne Frank and 10 million won ($8,846).

The House of Sharing presented him with a painting by Kim Sun-deok, a victim who died in 2004, and a book written by victims.

“We are thankful for the former chancellor of Germany for coming all the way here to see us,” said Lee Yong-su.

“I have met victims of the Holocaust before. I cried when I saw the way Germany apologized to them for what happened. They are blessed to have received a sincere apology.”

Schroder and the four victims embraced each other.

Schroder told the JoongAng Ilbo before the visit that it was to “show that people care about the victims and their fate and that they are interested in knowing something that factually took place.”