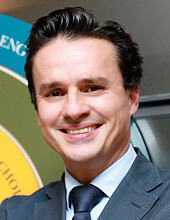 He will also overlook business in Taiwan and Hong Kong as BAT’s general manager of the North Asian region.

Juery joined BAT in 2010 as the general manager for the company’s Austria unit, later serving as CEO of BAT Hellas which operates in Greece, Cyprus, Malta, and Israel.

He also previously worked in BAT’s London headquarters as the global brand director for Rothmans, one of BAT’s core brands in the European market.

A Swiss citizen, Juery has had a long career in retail, having formerly worked for global cosmetics giant L’Oreal for 14 years.

“BAT Korea has always played a key role in BAT Group’s business,” he said. “It is a privilege to take the leadership of an organization whose people’s passion and dedication to the company’s performance and success are literally outstanding.”