[Sponsored Report] At Hyundai, eco-friendly is name of the game

[Sponsored Report] At Hyundai, eco-friendly is name of the game 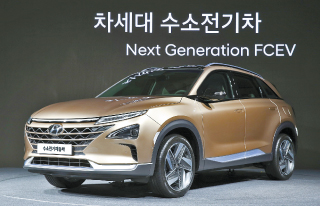 Hyundai Motor is strengthening its lineup of eco-friendly vehicles in hopes that they will drive future profit growth. By 2020, the automaker hopes to double the size of its eco-friendly lineup to 31 models.

Since Aug. 17, Hyundai has been displaying a next-generation fuel cell electric vehicle at the “FCEV House” in Yeouido’s Han River Park. The exhibition also includes virtual reality zones where visitors can learn about hydrogen as an energy source by experiencing what daily life might be like in a house powered by fuel cells.

As the first global automaker to mass-produce a fuel cell electric vehicle, Hyundai is seeking to solidify its leadership and expand its position in the rapidly growing eco-friendly vehicle market. The automaker plans to further strengthen its hybrid lineup, while keeping the advantages of the already-existing powertrain, as a stepping stone to zero emissions.

“Hyundai Motor is planning to announce the grand opening of the hydrogen society,” Vice President Lee Kwang-kook said, “a society run by a clean energy source, namely hydrogen, and to reaffirm Hyundai’s leading global status in the field of fuel cell electric vehicles.”

The soon-to-be-released next-generation fuel cell electric vehicle from Hyundai is an amalgam of the company’s best technologies, including an eco-friendly electric power system. The car will be able to run 580 kilometers (360 miles) on a single charge and reach 163 horsepower compared to conventional internal combustion engine-powered vehicles, according to the company.

The model will be able to start even when the outside temperature reaches negative 30 degrees Celsius (negative 22 Fahrenheit), overcoming a technical barrier for fuel cell electric vehicles. With an enhanced battery, it will be able to run for 10 years or 160,000 kilometers (99,419 miles)

For the model, Hyundai has developed its own membrane electrode assembly, the core component in a fuel cell that helps induce the electrochemical reaction needed to produce electricity. Through these improvements like localization of technology and construction of an optimized production system for key parts, Hyundai will be able to offer the vehicle at a competitive price.

To diversify the hybrid and plug-in lineup, Hyundai plans to introduce four-wheel drive and rear-wheel drive options, and expand the offerings to SUVs and large cars. By next year’s first half, the automaker plans to release an electric version of the small SUV Kona that can run for 390 kilometers on one charge. Afterward, Hyundai plans to develop electric cars that can last 500 kilometers on a single charge.

In the fuel cell category, the automaker will continue R&D work to make fuel cell systems lighter while increasing output to enhance the marketability of fuel cell electric vehicles. It also plans to launch a fuel cell-powered sedan.

Hyundai is also putting effort into developing self-driving and connected cars to take the lead in the future auto industry. In partnership with Cisco, the automaker has developed an operating system for connected cars and built a data center in China. Through these efforts, Hyundai hopes to introduce a smart car by 2020.

On Aug. 15, the automaker announced it was gearing up research in so-called vehicle-to-everything technology, a core part of self-driving vehicles. The technology allows cars to “talk” to each other through wireless communication. Vehicles can exchange information on traffic conditions, road closures and pedestrian crossings.

“There are definitely limitations to self-driving cars that only run based on sensors, especially when weather conditions are bad,” a Hyundai official said. “In order to develop a flawless self-driving vehicle, vehicle-to-everything technology is not an option, but a must.

“To develop a self-driving car that puts customer safety as the priority, Hyundai Motor is going to enhance active safety technology,” the official said.