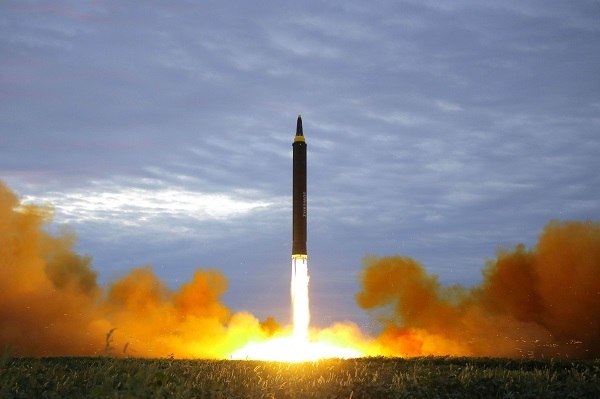 A file photo of North Korea's Hwasong-12 intermediate-range ballistic missile, which it test-launched on Aug. 29. [YONHAP]

North Korea launched a ballistic missile Friday morning that flew over Japan and landed in the northern Pacific, according to South Korea’s Joints Chiefs of Staff.

No damage has been reported.

The missile was fired from the Sunan airfield in the North Korean capital of Pyongyang at 6:57 a.m., reaching a peak altitude of 770 kilometers (478 miles) before landing about 3,700 kilometers away.

South Korean military officials said they were analyzing the type of the missile.

A National Security Council meeting in the Blue House was scheduled for 8 a.m.

The Japan Times reported that the missile, which flew over Hokkaido, activated an alert in 12 prefectures, though Tokyo did not attempt to intercept the projectile.

On Sept. 3, Pyongyang carried out its sixth nuclear experiment, to which the United Nations Security Council responded by unanimously deciding to impose fresh sanctions that ban North Korea’s textile exports, which are the country’s second-largest export after coal, and cap imports of crude oil.

Along with several other measures, the resolution aimed at reducing the regime’s annual export revenue by $800 million, or nearly one-quarter.

In its first official response to the UN resolution, North Korea said Wednesday it would “redouble the efforts to increase its strength,” flagrantly rejecting the measures while Pyongyang’s ambassador to the UN-sponsored Conference on Disarmament in Geneva threatened that the United States will suffer the “greatest pain” it has ever experienced in its history.

Taking that menace a step further Thursday, the Korea Asia-Pacific Peace Committee, which handles external affairs, said through the state-run Korean Central News Agency that it would use its nuclear weapons to sink Japan and reduce the U.S. mainland into “ashes and darkness” in retribution for the UN sanctions.

The latest missile test comes only a day after the South Korean Moon Jae-in administration on Thursday said it was considering an $8 million aid package for North Korea via the United Nations Children’s Fund, also known as Unicef, and the UN’s World Food Programme.

The Unification Ministry had said it would keep humanitarian assistance separate from political and military affairs when dealing with the Kim Jong-un regime, adding that even if the government officially decides next Thursday to carry out the aid plan, it would iron out specific details “with consideration of North-South relations.”

Asked whether Seoul could reverse the decision to support the North if it deemed inter-Korean relations got worse, the ministry did not answer.