Dolly Parton still gets a kick out of Hollywood

Dolly Parton still gets a kick out of Hollywood 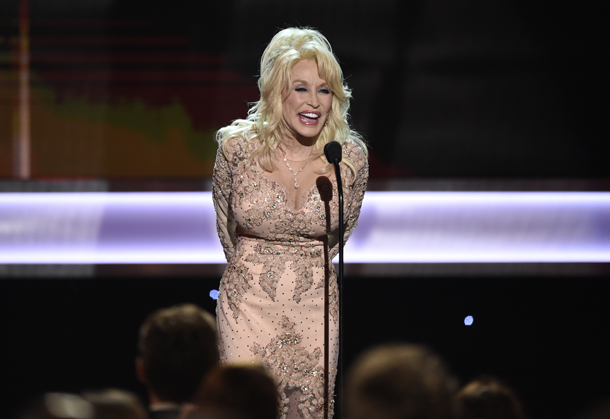 The 71-year-old entertainer was among the stars making the pre-show party rounds Friday with a stop at Variety and Women in Film’s gathering at Gracias Madre restaurant in West Hollywood, California.

Wearing a skin-tight black rhinestone-studded dress, Parton said she’s also excited about her gown and wig for Sunday’s show. She’s up for an Emmy in the TV movie category for “Dolly Parton’s Christmas of Many Colors: Circle of Love.”

Parton’s weekend was not all about fancy parties, though. She said she spent some time in the kitchen earlier Friday.

“Well, I made some sausage and biscuits for my trip home on the bus after the shows are over. And I made some chicken and dumplings, a few little groceries that I put together,” she said. “See, I travel in my tour bus and I always cook my own food. So that was not very glamorous, but it was good.”

There’s no word on whether Parton indulged in the snacks served at the party, which included mini empanadas and cheese-filled roasted figs. Viola Davis partook in the ice cream sundae bar, topping her scoop with frosted animal cookies.

Meanwhile, stars packed the restaurant’s patio. Gabrielle Union and Dwyane Wade chatted with friends, “The Handmaid’s Tale” star Samira Wiley held hands with her wife, and Kate Flannery hugged William H. Macy as he and Felicity Huffman made their way through the crowd.

The television academy also held a party Friday night for acting nominees, where John Turturro, Angela Bassett and Laverne Cox were among the guests. AP