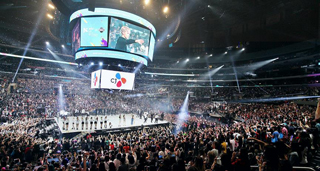 This year’s KCON at Staples Center in Los Angeles in August showed that the Korean Wave in North America has entered a new stage.
Considered a Korean version of Comic Con, the festival for fans of American popular culture, the event drew a total of 150,000 fans across multiple cities who paid to attend the convention this year.

It is not yet comparable to the Japan Expo in Paris, which draws a total of 250,000 visitors. But the growth is certainly impressive, since it started with 10,000 visitors in 2012.

The KCON audience in North America is no longer made up of only Asian-American fans — 60 percent of visitors this year were white, Hispanic or African-American. Additionally, the artists who were featured as performers this year represent diverse genres of Korean music — not just pop groups.

Hip-hop is an African-American cultural form that emphasizes sincerity and the artist’s personal experience. It is a new challenge for Korean agencies to create hip-hop-based groups as Korean society has little ethnic sensitivity. It is indeed a dramatic example of globalization and cultural hybridization.

As all contents in Korean popular culture are shared in real time worldwide, racially discriminatory expressions shared in Korean society and media create dangerous tension. Misogynistic or racially insensitive words and actions of K-pop stars become the target of global criticism, and the fact that JTBC’s “Non-Summit” members are mostly white males has been discussed at international forums.

Queer sentiment encouraged by idol culture is discussed academically at KCON, and viewers are outraged at how Korean dramas depict male characters using force against women as romantic. Racism and discrimination that foreigners experience in Korea is exposed online and condemned.

Viewed through a globalized lens, fans of Korean pop culture constantly address the need for Korean society to change and embrace feminism and cultural diversity.

The author is a professor of communication at Seoul National University.