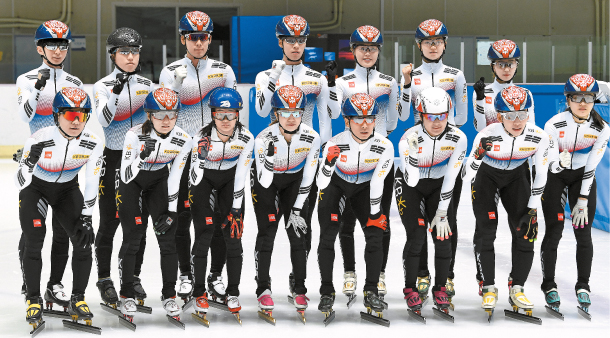 Korea’s short track speed skaters pose for a photo before an open practice session during the media day at the National Training Center in Seoul on Monday. The skaters will compete in their first World Cup event in Budapest, Hungary, starting on Sept. 28. [YONHAP]

Since the skaters’ performance will determine the number of Olympic spots in February, the Korean national team headed to Calgary, Canada, for three weeks of offseason training.

“We’ve focused a lot on speed during the offseason training,” said Kim Sun-tae, head coach of the Korean national short-track team. “Even in Korea, we’ve been focusing on the weaknesses found during the training in Calgary.”

Shim Suk-hee, two-time gold medalist in four consecutive World Cup events, mentioned that her main goal was to improve her speed throughout the training in Calgary, as there is still some time remaining until the Olympics.

“I think our training was a lot better than I expected,” Shim said.

“Since this is my first season where the Olympics is in the schedule, I’ve been focusing solely on the Olympics,” said Choi Min-jeong, who won the overall title at the 2015-16 World Championship.

Seo Yi-ra, a leading skater among the Korean men’s short-track skater, has shown strong determination to win a gold medal at the upcoming Olympics. Seo had a great finish in the 2016-17 season, where he won his first world overall championship in March in Rotterdam in the Netherlands.

With Seo’s victory he became the first skater to be named to the national team for the Olympics, as the title allowed him to get an automatic Olympic berth.

“I feel the responsibility to play well as I am representing Korea at the Olympics hosted at home,” Seo said. “Just like any other athlete, my goal is to win a gold medal. But personally, rather than an individual medal, I want to win the men’s relay race.”

In addition to the skaters’ determination in the upcoming World Cup races, the skaters also talked about their new uniforms, as they got to train wearing the new uniform in Calgary.

In May, the Korean Skating Union (KSU) announced that they will be switching their main uniform sponsor from Fila to Hunter, as there had been recent incidents where the uniform ripped during races. Though the decision was made so skaters could perform better, the decision also grew criticism from commenters worried that the skaters would not be able to perform as well in a uniform they were unfamiliar with.

“Unlike our previous uniform, the new uniform is partially bulletproof,” said Choi. “This means that we need to be more careful since it can rip easily. But it also means that we can be more active because it’s a lot lighter.”

Choi was satisfied with the new uniform as it hasn’t ripped yet. During the Sapporo Asian Winter Games, Choi’s uniform ripped when she fell during a race.

“When I first wore it I felt like I got slower because it was too tight,” said Lim Hyo-jun, who finished first in the 2017-18 national team qualifying race. “But once I adjusted to it, I felt a lot more comfortable.”

Kim was also pleased with the new uniform, adding that “the biggest advantage of the new uniform is the sense of unity. Since it’s so tight, the skaters feel as if the uniform is a part of their body, which will allow them to skate lighter and faster.”