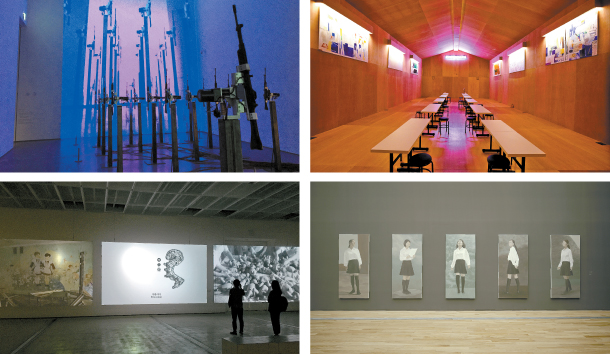 There is something interesting about an exhibition that started last week at the National Museum of Modern and Contemporary Art (MMCA)’s Seoul branch in central Seoul. For the sixth year in a row, the four artists nominated for the prestigious “Korea Artist Prize,” granted by the museum and the SBS Foundation, have set up a show to display the best of their work. But this year’s edition looks like a well designed group exhibition under a specific theme rather than a competition.

This year’s finalists are Bek Hyunjin, Sunny Kim, Kelvin Kyungkun Park and Song Sanghee. All of them are quite different from one another in style and the medium that they use. But their works can be linked to create a story about the realities of Korean society as perceived by individuals.

The show starts with Kim’s paintings, which depict landscapes with bodies of water such as lakes and waterfalls or girls in school uniforms. Although the paintings have no surrealist elements, they give off a feeling of magic realism, as their low chroma colors give off a calm and dreamy atmosphere.

The artist said during a press preview last Tuesday that the paintings are based on her vague emotions about what she might have missed in her motherland after emigrating to the United States in her youth.

At a solo show in Seoul last year, she told the Korea JoongAng Daily that her paintings are not of her experiences, “so they have the sense of floating.”

Then how about impressions of the country to those who have remained in Korea? Bek shows one emotion - bitterness - through his installation work titled “UnemploymentBankruptcyDivorceDebtSuicide Rest Stop.” It is a big room with tables and stools on the floor and the artist’s abstract paintings hanging on the high walls, where “tired Koreans can rest,” he said.

But resting here could lead to a very gloomy feeling, as incense burns to spread a smell commonly found at Korean funeral halls and on the tables are sheets of paper printed with the artist’s poem about a man who was fired, opened his own small business, went bankrupt, got divorced and then committed suicide. The story follows a trajectory that has been taken by more than a few Koreans since the 1997 financial crisis.

Another gloomy face of Korea is revealed by Park’s installation and media work. Thirty-two robots with rifles uniformly move to the continuous sound of a loud bang, just like soldiers in training. They are linked to an exposed control panel by dark red wires, which will remind the viewers of blood vessels. Images are projected in real time on the two gigantic screens installed at both ends of the installation.

“I felt as if I became a robot, when I was training during my mandatory military service,” the artist said. “And whenever I made a mistake, my fellow soldiers had to take responsibility and the training session was prolonged. So I became more afraid of angry looks from my fellow solders than from the instructor. That’s the military. In it, you become part of a group - not an individual.”

Park, who experienced a culture shock during military service after growing up abroad, won the prestigious ArtSpectrum Award granted by Leeum, Samsung Museum of Art, in 2016 with a short film on the topic.

It is a surrealist montage of documentary photos and videos, landscape videos and animations. It also displays texts inspired by a Korean folk story about a baby born with wings, who could grow up to be the savior of common people against the oppressing state but was killed by its own parents who were afraid the state would kill them in advance.

The video includes images from the Chernobyl nuclear accident and the South Korean government’s alleged killing of civilians believed to be communists in 1949.

The museum will announce the final winner on Dec. 5.