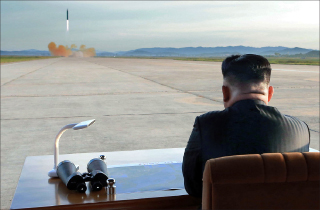 North Korean leader Kim Jong-un watches the launch of a Hwasong-12 intermediate-range ballistic missile from a mobile platform at an airport in Pyongyang on Aug. 29. [YONHAP]

My parents hail from North Korea. My father was born in Pyongyang, and my mother came from Bukchong County in South Hamgyong. After marrying, they lived together in Hamhung, South Hamgyong, before evacuating aboard the SS Meredith Victory during the Korean War. The refugee boat arrived at Geoje Island in South Korea.

As a result, I am used to the rough language of North Koreans. Those who fled from North Korea during the war have a unique toughness in them, having withstood the turbulence of war and struggled to make a living in new homes in the South. They are highly proud of their innate nature as northerners whose ancestors persistently had to fight against Chinese and other invaders on top of their self-bred dignity to defend their family in a new environment.

My North Korean genes were revived during the historic inter-Korean summit in June 2000. I was astonished upon seeing North Korean leader Kim Jong-il on television, as he reminded me of my father with his Pyongyang accent and hearty gestures and laughs. My heart brimmed with the hope that I could visit my mother’s home in Hamhung upon seeing our president, Kim Dae-jung, and Kim Jong-il embrace. But my mother did not look so thrilled. “North Koreans are different from South Koreans,” she calmly said.

North Koreans at the time were just coming out of the “Arduous March,” the propaganda term romanticizing the extreme famine and hardship stemming from a lengthy drought and isolation from the outside world. On Oct. 3, 2000, North Korea’s state mouthpiece, the Rodong Sinmun, said in its editorial, “We have wept tears and gone through hardship that we would have done in a thousand years. We will never forget our ordeal.” North Korea traces its ancestral roots to the Gojoseon, the founding dynasty of the Koreans, as well as Goguryeo (BC 37-668 AD), Balhae (698-926) and Goryeo (918-1392). They believe they are the legitimate descendants of the Korean race. They cannot accept the southerners’ wishes to absorb North Korea or integrate into a single Korean community. My mother knew that.

Since the summit talks, North Koreans have talked of cooperation and unity in one race. They have portrayed aid as a “symbol” of good will among people sharing the same bloodline and language. Kim Dae-jung, championing his signature Sunshine Policy, offered generous aid and economic ventures. His liberal successor, Roh Moo-hyun, inherited the same peace-seeking policy toward North Korea.

Conservative governments were equally hopeful and naïve. President Lee Myung-bak offered to help North Koreans strengthen their economy to generate a per-capita income of $3,000 if they give up their nuclear weapons and open up. President Park Geun-hye joined the chorus by saying a unification of two Koreas would be a “jackpot.”

North Korea, after confidently testing a hydrogen bomb and intercontinental ballistic missiles, is close to earning international recognition as a nuclear weapons state. North Koreans can now boldly stand up to the United States as they believe America cannot strike them as long as they have the capacity to shoot nuclear-tipped missiles toward the United States. They even mock South Koreans for “wagging their tail at a tiger.” They were laughing at the naivety of Seoul vowing it would not tolerate Pyongyang’s nuclear program while still making a conciliatory gesture of $8 million in humanitarian aid.

In the book “Dark Sun: the Making of the Hydrogen Bomb” by American writer Richard Rhodes, Igor Kurchatov, the scientific director of the Soviet nuclear project, admitted he was able to sleep again only after being convinced that nuclear weapons could never possibly be used. That was after the Soviets developed H-bombs 64 years ago.

The destructiveness of the H-bomb North Koreans have achieved is unimaginable. The optimists think North Koreans would never use the weapons as the move could be suicidal. But the only thing we can do now is pitifully pray that Kim Jong-un is as sane as Kurchatov.