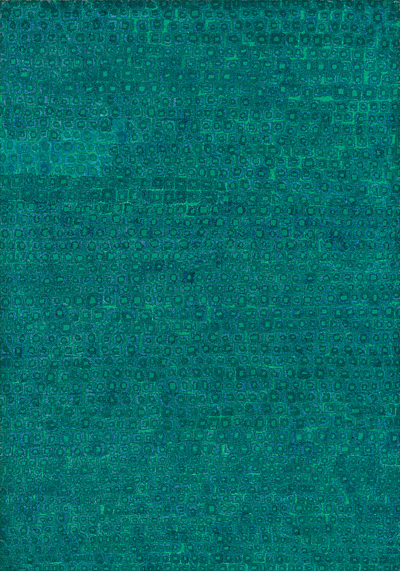 Among the highlights is Korean modern art master Kim Whanki’s (1913-1974) turquoise-abstract painting “Untitled.” It is among the so-called dot paintings that Kim created in his New York period (1963-1974), which is regarded as the peak of Kim’s oeuvre.

The painting is smaller than Kim’s most well-known dot paintings, including the five paintings that were sold in recent years by the auction house and K Auction, which became Korea’s most expensive paintings to ever sell at auction.

“It is a very meaningful piece because Kim’s widow HyangAn let the work be presented at the 1978 edition of the Paris art fair, while not permitting it to be sold,” said Chey Yoon-seok, managing director of Seoul Auction. “It is said HyangAn cherished the painting very much.”

Another highlight includes a portrait of Emperor Gojong of the Joseon Dynasty by Chae Yong-shin, in which the techniques of traditional Korean and Western paintings are mixed. Chae made the painting in 1920 after Gojong had already died. He based the painting on a 1901 piece he and other artists created while the king was alive.

The estimate for the painting was not unveiled.

A preview of the works on sale is running until the auction takes place.

Admission is free. To reach the auction house, head to Gyeongbokgung Station, take line No. 3, exit 3, and take bus No. 1711 to the Lotte Apartment stop. Then walk for five minutes.

QI BAISHI: FROM A CARPENTER TO A MASTER

To Oct. 8: The first-ever retrospective of legendary Chinese art master Qi Baishi (1864-1957) features 53 pieces of the artist’s ink and color paintings, calligraphy and seal carving art. They include two of Qi’s shrimp paintings, for which he is best known.

The exhibit also includes 83 antique pieces that Qi collected over his lifetime.

About 40 paintings, calligraphy and seal carving works by contemporary Korean and Chinese artists in homage to Qi are also on view in this exhibition.