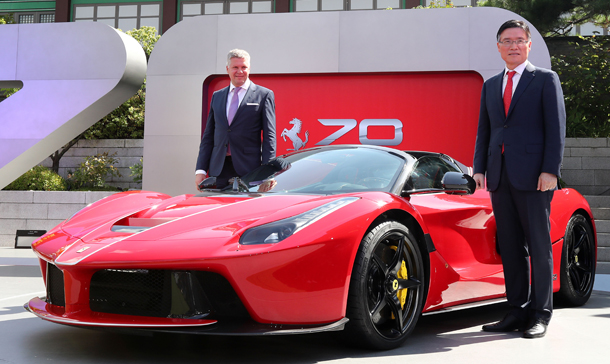 Dieter Knechtel, CEO of Ferrari Far East Hub, left, and Kim Gwang-cheol, CEO of FMK, stand next to the LaFerrari Aperta, the Italian automaker’s 70th-annivesary model, on Monday at the Shilla Hotel in central Seoul. [FMK]

In celebration of Ferrari’s 70th anniversary, the Italian automaker brought its limited-edition model, the LaFerrari Aperta, to Korea on Monday.

Only 210 units of the model have been manufactured worldwide, with the last sold at an auction early this month for a whopping 8.3 million euros ($9.9 million), which was all donated to charity.

“Through continuous technological innovation, new car development and enhancement of automotive culture globally, Ferrari has been taking the lead in the supercar industry for the past 70 years,” said Kim Gwang-cheol, CEO of FMK, a Korean importer and distributor of Ferrari cars, during a media event on Monday at the Shilla Hotel in central Seoul. FMK also imports Maserati cars to Korea.

“Ferrari will continue to deliver the pleasure of driving to its consumers,” Kim said.

Korea is the 19th destination, and eighth country in Asia, on a world tour encompassing some 60 markets. Ferrari has been bringing its 70th-anniversary model to countries around the world since March.

LaFerrari Aperta is an open-top hybrid model equipped with an electric motor and the company’s classic V12 engine. It has a maximum 963 horsepower and is able to speed up to 350 kilometers an hour (217 miles per hour) with a burning efficiency reaching 94 percent. It takes less than three seconds for the car to reach 100 kilometers an hour and 7.1 seconds to surpass 200 kilometers an hour.

“Driving a Ferrari is not only about owning,” said Dieter Knechtel, CEO of Ferrari Far East Hub, at the media event. “It delivers a full set of emotions that only owning and driving Ferrari is able to do.”

At the media event, Ferrari also displayed its special-edition F12berlinetta model, one of 350 cars inspired by the automaker’s 70 classic models. The F12berlinetta takes its inspiration from Ferrari’s SA Aperta.