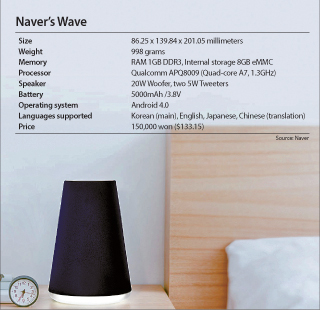 A month ago, internet portal Naver and its Line messaging app released Wave, its smart speaker, after getting 8,000 pre-launch orders. Rival messenger app Kakao put on sale its Kakao Mini speaker on Monday - and 3,000 units were sold out in 38 minutes.

Journalists have had a few weeks to try out Wave and get to know its strength, weaknesses, and its anthropomorphized virtual assistant.

Wave is a cone-shaped, black speaker standing 20 centimeters (8 inches) high. It boasts a 20-watt woofer and two 5-watt tweeters, in between the two Korean smart speakers already on the market: SK Telecom’s Nugu and KT’s Giga Genie. A ring of light at the bottom of the device provides an ambient mood.

The Wave integrates a series of AI technologies from Naver including natural language processing, voice recognition, translation and access to a content database, which Naver believes will give its smart speaker an upper hand over other Korean virtual assistants.

The first step to using the device is pairing it with the Clova app on your smartphone over Bluetooth. (This requires a Naver ID, which anyone can get). Clova is short for CLOud Virtual Assistant. Both Line Japan and Naver’s research and development arm Naver Labs worked together on the platform and the speaker.

You start a conversation by calling the name “Sally.” Clova’s Papago translation platform gives Wave a highly advanced translation capability not available in other Korean virtual assistants - supposedly as powerful as Google Translate. It can translate from Korean to English, Japanese and Chinese using artificial intelligence. Wave’s precision in translation is amazing to behold when you ask it to translate any phrase, even proper nouns such as Starbucks.

Wave is capable of accessing the same kind of information as other virtual assistants such as news, stock prices and weather information.

It finds answers to current event-related questions through its Knowledge In platform. So it is able to answer who the current president of the Republic of Korea is - but not which Korean president is currently under trial. When you ask Wave to teach you how to make kimchi, it comes up with the recipe for chongak kimchi, or kimchi made of young radish.

Naver advertises the assistant’s ability to enhance your English through an interactive conversation feature. But that turned out to be the most disappointing feature.

You can start an English conversation with the speaker by saying, “Sally, let’s speak in English.” The speaker’s name then changes to Monica, and its IQ - which was at a brilliant level when translating between languages - nose-dives to the dummy level.

The following is a conversation I had with Monica.

“Let me ask you a question if that’s okay,” Monica says.

“That is not okay,” I answered jokingly. But Monica didn’t hear and went on: “Have you ever been disappointed by your friends?”

“That must have been hurt,” Monica replied. “Can you explain what happened?”

“I have never been disappointed by my friends,” I persisted.

“I see,” Monica said blithely. “Thanks for telling me. Communicating with people from different country could be tricky. Do you have any friends from other countries?”

“You must be good at communicating with foreigners. Which part of the country is your friend from?”

The conversation algorithm needs a lot of work. Although Naver claims the English conversation feature, which relies on deep learning, would get better as more people use it, developers definitely should tackle problems with the machine’s interaction with humans and add more sophisticated cultural context.

At the current stage, the questions programmed in sound like they were drafted by a native Korean teacher of English at a middle school who has barely communicated with “foreigners,” one of the most commonly occurring words in my interaction with Monica.