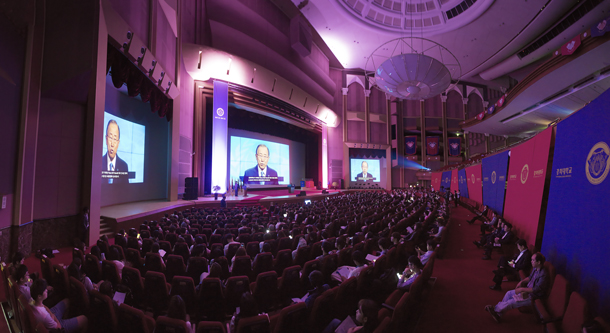 Kyung Hee University is celebrating the 36th annual UN International Day of Peace with the Peace BAR Festival at its Seoul campus from Thursday to Friday. (BAR stands for “spiritually beautiful, materially affluent and humanly rewarding.”)

The theme of this year’s event is “Together for Peace: Respect, Safety and Dignity for All.” Intellectuals and students from Korea and around the world will gather to discuss Korea’s “Candlelight Revolution” and the Czech “Velvet Revolution” in the context of human history.

The Peace BAR Festival is co-sponsored by the World Academy of Art and Science, an international organization dedicated to questions about the future of humanity, and the Conference of NGOs, which aims to strengthen solidarity in civil society worldwide.

On the first day, a ceremony to commemorate the UN International Day of Peace and a round-table discussion are scheduled to take place. The World Academy of Art and Science, Conference of NGOs and academics from Korea and abroad will reflect on the protests that ousted President Park Geun-hye from office and the necessary role of civil society in an age of great transformation.

The ceremony will explain the background and meaning of the UN International Day of Peace, with a congratulatory message from UN Secretary General António Guterres.

A roundtable discussion on the topic “After the Velvet and Candlelight: Liberty, Citizen and Future” will follow. Cho In-won, president of Kyung Hee University; Michael Zantovsky, director of the Vaclav Havel Library; Liberato Bautista, former president of the Conference of NGOs; Garry Jacobs, CEO of the World Academy of Art and Science; and Park Young Shin, honorary professor at Yonsei University; will offer their perspectives on the famous candlelight protests that took place in Korea from last October to this spring.

On the second day of the festival, the Future Report 2017 conference on “The Age of Civilization Transformation: The Future of Higher Education and the Tasks of Global Citizen” will engage professors and students in a discussion about problems facing the world and possible solutions. A report will be produced from this session and presented at the upcoming World Academy of Art and Science Higher Education Conference in November.

In time with the festival, Humanitas College, the liberal arts college of Kyung Hee University, has designated the fourth week of September as the week of world peace, a time for Korean and international students to discuss issues related to international peace from the future generation’s perspective and share ideas about best practices. Commemoration events were held at the Seoul campus and global campus in Yongin, Gyeonggi, on Monday. Numerous other events, including a movie screening, exhibitions, a campus tour on the history of peace at Kyung Hee University and the UNAI ASPIRE KyungHee Peace Forum, will take place.

“Through the Peace BAR Festival, we hope to focus on the common traits of the Velvet and Candlelight Revolutions to seek development of democracy and new citizenship,” said Lee Taek-gwang, vice rector of the Global Academy of Future Civilization at Kyung Hee University. “Michael Zantovsky, director of the Vaclav Havel Library, was the leader during the Prague Spring. I look forward to listening to what he thinks about the implication of the Korean Candlelight Revolution and Czech Velvet Revolution on the perspective of liberty, citizens and the future.” 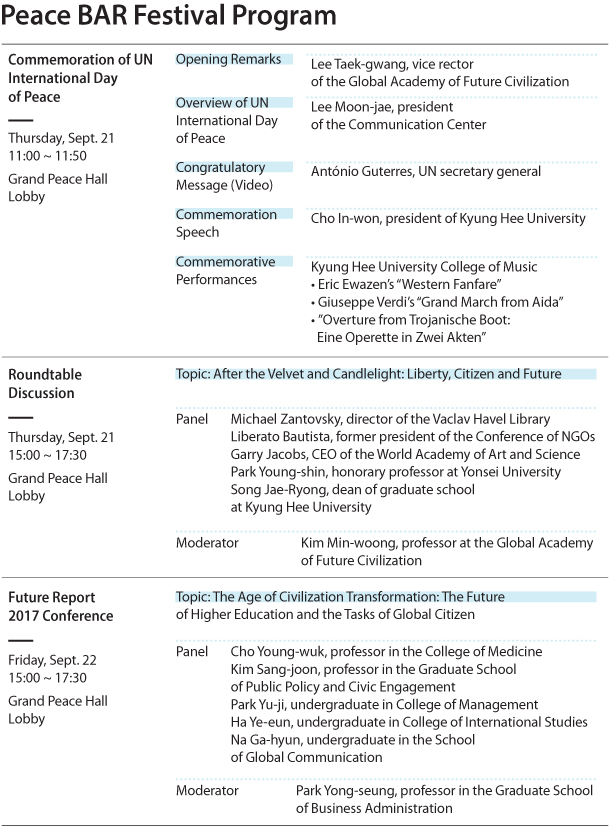 In an era where the crisis of democracy is a frequent topic of discussion, the candlelight that heated the southern half of the Korean Peninsula has gained traction all around the world. What is the historical meaning of this candlelight? Does it hold that much historically significant implication that fits the name “Candlelight Revolution” or “incident in an era”? Is it enough to open up new prospects for a democratic society, leave behind the old political order, evil customs, practices and intentional chaos?

Introspection about candlelight will not suggest direct solutions to all of these questions. However, there is one fact that is clear: that this can provide a foundation of intellectual research for political disorder taking place all over the world, from the United States to Europe. A mass rally of approximately 14 million people, peaceful political assembly and bloodless resistance, an outpour of civic awareness to overcome the established political system: Korea’s “Candlelight Revolution” is a combination of all these signs of transformation. Candlelight revealed the inconsistencies of our democracy and limitations of the established political system, and at the same time suggested new possibilities for citizen action based on an awakened civic consciousness.

The Global Academy of Future Civilization at Kyung Hee University, Conference of NGOs and World Academy of Art and Science is contemplating the historical meaning of candlelight to commemorate the 36th annual UN International Day of Peace. Special attention is going to be paid to civic awareness in hopes of a better society, and what it implies in the context of history of civilization.

In this era where the established political system and tyranny of misdirected democracy are in direct confrontation with civic resistance, what kind of future are we dreaming of? What is the message that environmental disruption and climate change, the spread of weapons of mass destruction, and the possible rise of uncontrollable AI convey? The theme of this year’s Peace BAR Festival is to plan for a “peaceful future that is sustainable” in an era where societal crisis is taking place by focusing on the civic awareness filled in candlelight. 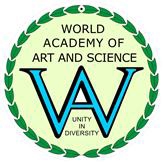 World Academy of Art and Science

The World Academy of Art and Science is an international organization of the world’s brightest minds. Former members include Albert Einstein, Robert Oppenheimer and Bertrand Russell. It hopes to create a better future for humanity through the synthesis of science, humanities, art and public action. The academy was founded on the basis that genuine study based on creative and original ideas has the power to effect change in the world. “The academy dedicates itself to the pursuit of creative, catalytic ideas that can provide to present and future generations enlightened leadership in thought that leads to effective action,” according to the organization’s website.

The Conference of NGOs was founded in 1948 and has a consultative relationship with the United Nations. It has supported UN agendas including the Millennium Development Goals, Sustainable Development Goals and 2030 Agenda for Sustainable Development, and participated in UN decision-making and program-planning procedures in hopes of creating a better world, a world of economic and social justice. “The mission of CoNGO is to facilitate through various means the development of a dynamic and informed world-wide NGO community able to influence policies and actions at all levels of the United Nations,” according to the organization’s website.