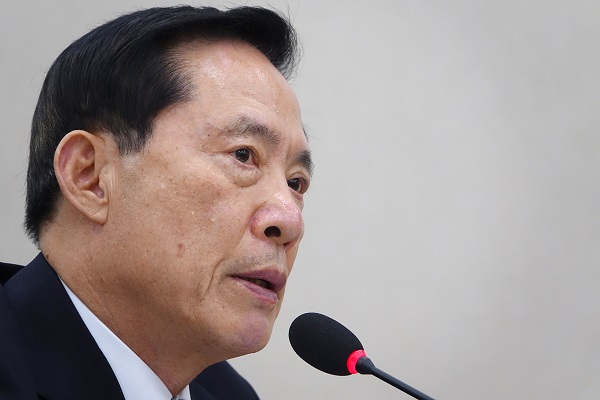 “The Blue House issued a stern warning to Minister Song over his remarks at the Defense Committee of the National Assembly,” Senior Presidential Press Secretary Yoon Young-chan said Tuesday.

The rare rebuke was made public by a text message sent to journalists in the morning. Following the announcement, the Ministry of National Defense vowed to respect the warning. “The minister will have an opportunity later to express his position,” said Moon Sang-gyun, spokesman of the ministry.

Song issued an apology Tuesday afternoon at the National Assembly that he spoke too emotionally.
Both men worked in Moon’s election campaign but have very different approaches to the North. Their discord has already been reported but was especially highlighted on Monday when Song attacked Moon Chung-in before the National Assembly’s National Defense Committee.

“It’s really deplorable seeing how the man goes around talking like a scholar, not a special presidential adviser,” Song said. “I met him once or twice before I joined the cabinet. Because he is a really freewheeling person, I concluded that I should not deal with him and told my aides to leave him alone.”

Song also rejected the notion that the government should downsize its joint military drills with the United States in return for a freeze on North Korea’s nuclear and missile tests, suggested by Moon Chung-in in June during an event in Washington. He added that he stands by his earlier remark that decapitation drills, designed to take out North Korea’s leadership, are an option.

Rep. Kim Young-woo, chairman of the National Defense Committee, was quick to take Song’s side in the dispute.
“If the minister of national defense truly thinks so,” Kim told Song during the Assembly hearing, “and if the special adviser is an obstacle to you performing your duty, you should recommend that the president fire him.”

The animosity appears to be mutual. During his media interview on Friday, Moon Chung-in criticized Song for his earlier remarks at the National Assembly on Sept. 4 that the military is preparing a “decapitation” strike on the North. Moon Chung-in called such remarks “extremely inappropriate.”

In addition to his remarks about Moon Chung-in, the Blue House censured Song “for causing confusion about government policy with his uncoordinated comments.”

This comes after Song said Monday that he was told by the Unification Ministry that the government’s $8 million humanitarian aid package to the North will be delayed, though he did not say by how much.

Just hours after Moon’s offer of aid last week, the North fired another ballistic missile over Japan, and Japan subsequently expressed opposition to the aid plan.

Song’s remark therefore made it seem the government was rethinking its decision, but the Unification Ministry said Tuesday that the government’s position remains unchanged.

“I do not know what the defense minister’s intention was, but there was no change in the government’s stance,” a Unification Ministry official told reporters on Tuesday. “If Song spoke as if the government changed its stance, that is not true.”

The official, however, did not say when the aid will be offered. “It’s undesirable to repeatedly raise the issue of timing,” he said.
As a result of this conflict, the ruling and opposition parties are now split between the defense minister and the special adviser.

While the ruling party sided with Moon Chung-in, with Rep. Min Byung-doo of the Democratic Party saying Song has challenged President Moon’s appointment rights by insulting the special adviser, Song won rare support from conservatives, with the Liberty Korea Party and the Bareun Party demanding that Moon Chung-in step down from the special adviser post.

“Moon’s pro-North and romantic view is a serious problem,” said Rep. Chung Woo-taik, floor leader of the Liberty Korea Party.
“Song’s remarks are realistic and right and we must prepare accordingly,” said Rep. Hong Moon-pyo, secretary general of the party.
“Moon should have spoken more strongly to defend the national security, but he speaks like the special adviser of North Korea.”