The courage to make history

The courage to make history 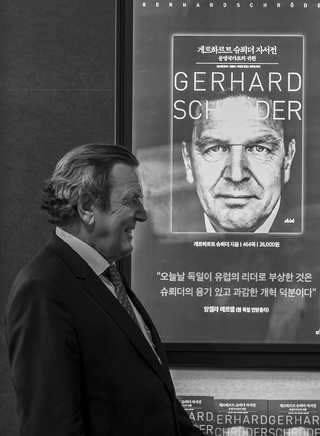 In 2002, “The Tax Song” became popular in Germany as it lampooned the policies of Chancellor Gerhard Schröder, who had been re-elected that year to lead a coalition government between the Social Democratic Party and Greens.

Germans raved about the satirical song on how the politician promised no tax hikes during his campaign, but then slyly imposed indirect taxes after winning office. More than a million albums were sold, and “The Tax Song” became the most popular song of the year. When the Schröder government fell three years later, many thought the song was the impetus.

In fact, Schröder doesn’t deserve criticism when it comes to the dog tax, which was imposed on dog owners. It was a local tax, something the federal government did not have jurisdiction over. The dog tax was already in place in many regions even before the Schröder government. The rate was about 150,000 won ($130) per pet and varied depending on the region, size and breed. Many pet owners were not happy with the tax. One even pretended his dog was a sheep to avoid the tax. Regardless, the dog tax had little to do with Schröder.

Despite the factual error, the song was a hit for one simple reason: Schröder was unpopular. His approval rating was already low, and his party barely won election. Working-class Germans were not happy with the policies he presented after re-election, such as cuts to government subsidies. At the time, the charismatic Jacques Chirac was president in France, and Tony Blair with all his charm was prime minister of the United Kingdom. Compared to these superstars, Schröder seemed dull and boring. Compounding that, Germany’s economic growth was sluggish and unemployment was rising in the aftermath of reunification.

The Confederation of German Employers’ Associations condemned the reforms as insufficient, and the German Trade Union Confederation planned protests demanding the plan be scrapped. While unions, the political base of the Social Democrats, called Schröder a fraud and traitor, the chancellor negotiated with the opposition Christian Democrats and passed all of the bills related to Agenda 2010.

It took less than two years for Schröder to be ousted from politics. After a series of local election defeats, he was widely blamed. During the general election in September 2005, the party lost many seats, and the Christian Democratic Party’s Angela Merkel became the new chancellor.

Schröder became the symbol of a failed politician. He served as chancellor for seven years, while his predecessor, Helmut Kohl, was in office for 16 years, and Merkel is in her 12th year. President Chirac and Prime Minister Blair were in power for 12 and 10 years, respectively.

After retiring completely from politics, Schröder again became a subject of controversy for taking on the role of adviser to a British investment bank owned by the wealthy Rothschild family and Russia’s Gazprom.

But in recent years, Schröder has made a glorious comeback. He has been invited to international events, and his 2007 memoir has been translated and published in many countries. Recently, Schröder came to Korea to celebrate the publication of a Korean edition. He also visited the House of Sharing and met with former “comfort women.” The tears he showed left a deep impression on many Koreans.

In a speech four years ago, Schröder said leadership was the power to assume sacrifice and push for one’s beliefs. Last spring, Chancellor Merkel expressed appreciation for her predecessor opening the door to a new era with Agenda 2010. In Germany, a political leader who put his career at stake for the future of his country, and his successor, who has acknowledged the achievements of her political enemy, are all making history together.

*The author is national news editor at the JoongAng Ilbo.