At 82, Judi Dench’s mission is the same: to learn

At 82, Judi Dench’s mission is the same: to learn 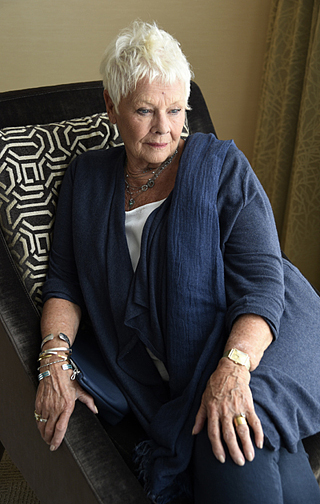 Judi Dench, who stars in “Victoria and Abdul,” poses for a portrait during the Toronto International Film Festival in Toronto on Sept. 11. [AP/YONHAP]

TORONTO - Judi Dench is not tired.

“I’ve had one of those pep-up drinks,” Dench, beaming as she sits down for a recent interview. “I feel rather sparky.”

Caffeinated or not, Dench, 82, remains fully energized. As Stephen Frears, the director of her latest film, “Victoria & Abdul,” marvels: “She’s the biggest female star in Britain” - a statement that takes a moment to realize how true it is. “It’s phenomenal at her age.”

Dench’s eyesight had deteriorated in recent years due to macular degeneration, so scripts need to be read to her. But that’s done little to slow her down or dim her ferocious, mischievous intelligence. On her right wrist is a tattoo of her personal motto, “Carpe Diem” (“Seize the Day”). She had it done for her 81st birthday.

“The process of learning is quite difficult,” she says of her eyes. “I can do it. I just have to adjust in a different way. You do what you can, don’t you?”

It’s a spirit of undaunted inquisitiveness that Dench shares with her latest character, Queen Victoria. In Frears’ film, which Focus Features will open in limited release Friday, Dench returns to the monarch she memorably played 20 years ago in her big-screen breakthrough, John Madden’s “Mrs. Brown.” Dench has credited that film - and the indie distributor who picked it up for nationwide release (Harvey Weinstein) - with birthing her film career.

Letters and diaries uncovered in Shrabani Basu’s 2010 book revealed the depth of the Queen’s friendship with Abdul Karim (Ali Fazal in the film), a 24-year-old Indian clerk when he arrived in 1887, four years after Brown’s death. Despite the staunch disapproval by the royal court of a Muslim being Victoria’s close confidant, he became her teacher, or munshi, and stayed close to her side up until her death in 1901. Though Victoria was the Empress of India, she knew little of the colony Britain was busy ruthlessly exploiting.

“I certainly never expected to be playing her again,” says Dench. “Suddenly all the work I had done on that all came back and filled up the character. You have a character and you have to find out the details of them, it’s like coloring them in. All that had been done, so that stood me in a very good stead.”

“Victoria & Abdul” is Dench’s fifth film with Frears, who last directed her in 2013’s “Philomena,” which earned Dench her seventh Oscar nomination. (Her sole win was for her Queen Elizabeth I in 1999’s “Shakespeare in Love.”) She and Frears share an unfussy, workmanlike attitude.

“She’s clocked that one,” Frears says of his subtle directions. “She’s a highly intelligent woman.”

Frears, the veteran director of “The Queen” and “Dangerous Liaisons,” said he would only make “Victoria & Abdul” if Dench agreed.