Prying relatives are No. 1 Chuseok fear

Prying relatives are No. 1 Chuseok fear 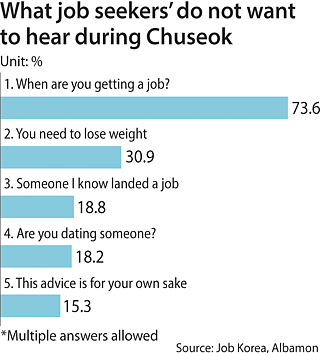 Shim Myung-gyu has spent the last 12 months looking for a job. Next month will be a crucial period for him as a number of large companies hold recruit examinations after the Chuseok holiday. But Shim, a senior at Yonsei University in Seoul, said his biggest worry is not the entrance exams he will face next month. “It might sound silly, but I am more worried about my relatives wondering about why I have yet to land a job during the holidays,” the 27-year-old said Thursday.

“They think it should be easier for me than others to get a job because of my education background, which is not the case anymore in this highly saturated job market,” he continued.

Shim is among many job seekers who feel under pressure and even stressed about the upcoming Chuseok holidays that begin on Sept. 30. A joint survey by job search portals JobKorea and Albamon showed that more than eight out 10 people now in the job market are stressed about the holiday.

Of 1,489 job seekers who were polled, 80.2 percent said they were already feeling stressed about the approaching holidays. When are you going to get a job?” was chosen as the most unwanted question by 73.6 percent of respondents. The second most unwanted comment from relatives was “You need to lose weight,” which was picked by 30.9 percent of the 1,489 respondents.

Relatives comparing them to someone else that had recently landed a job was the third most unwanted comment, with 18.8 percent.

The unemployment rate for people aged between 15 and 29 stood at 9.4 percent last month, according to the government, the highest for August since 1999 when the country was reeling from the 1997 financial crisis.

For the 1,403 workers that were also polled, the stress level was lower at 74.6 percent.

At 81.1 percent, married female workers were the most stressed, largely due to the work required to prepare for ancestral rituals.