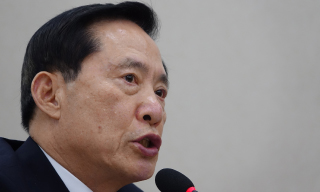 “I don’t want to meet him,” said President Roh Moo-hyun when Song Min-soon, a key national security aide, advised him to meet with his U.S. counterpart. Song served as the head of the National Security Office of the Blue House and foreign minister in the Roh administration.

“How come you don’t want to meet him?” Song asked.

For Roh, U.S. President George W. Bush was an eyesore. Whenever Roh managed to persuade the North to join a negotiation after much difficulty, Bush created an obstacle, calling the North an “axis of evil” or imposing financial sanctions. It was no surprise that Roh didn’t want to meet him.

But Song didn’t back down.

“Why are you harassing me?” Roh complained to Song.

But after a few days of thinking, Roh changed his mind.

“You are the head of foreign affairs, so I should listen to you,” Roh told Song. “Tell me when and how I should meet with Bush.”

Roh was a president who enjoyed popularity in Korea after saying, “What’s so wrong if we are a little anti-American?” But he had faced the reality in foreign affairs and when making appointments. Bureaucrats with realistic views were appointed near the so-called 386 generation of Roh’s allies in the Blue House to maintain the balance. Song was such a balancer, as was Ban Ki-moon.

At the end of 2003, the first year of Roh’s presidency, the so-called 386 politicians labeled the North America Bureau of the Foreign Ministry “sycophants praising the United States” and managed to oust Foreign Minister Yoon Young-kwan.

Their power was so strong and they wanted the next minister to be an advocate of independent national defense who would listen to their opinions.

They tried to push a diplomat who served as the assistant minister of the ministry and ambassador to France. But Roh’s choice was different. He appointed Ban, an elite diplomat with close ties to the United States, as the foreign minister.

The 386 politicians fiercely resisted. They tired to find flaws to oust Ban. But Roh was undeterred and only gave Ban more power. “The mood in Washington is worrisome, so I had to appoint Ban,” Roh told them. But it was also an attempt to prevent their unilateral control of power.

Ban lived up to Roh’s expectation. The Korea-U.S. alliance was seen as being at its end, but it managed to overcome the crisis because of Roh’s hiring of Ban. Also, Korea was able to produce a UN secretary general because Roh decided to appoint him as the foreign minister.

Minister of National Defense Song Young-moo recently received a stern warning from the Blue House of Moon Jae-in. He was criticized for having publicly insulted Moon Chung-in, the presidential special adviser, and told the National Assembly that he would consider a plan for redeployment of tactical nuclear weapons. The faction in the Blue House that promoted independent national defense while lessening the country’s heavy reliance on the United States probably tried to undermine Song with the warning.

Moon must remember what Roh did and protect Song. If Moon is captivated by the group thinking of the presidential secretaries and sides with them, a diplomatic disaster is destined to unfold. The Korean Peninsula is facing the worst crisis since the Korean War, and Moon’s determination to protect Song is more important than ever.

The foreign affairs and national security team of this administration is too fragile and inexperienced that the people are largely concerned about their reliability. Among them, Song is perhaps the only dependable person.

It may be easy to replace him by listening to opinions that say he deserves to be fired for having challenged the president publicly. But if Moon fires Song, he will be left with only yes-men in his administration. When the power is concentrated on a specific group, the president’s power and room to maneuver will drastically shrink.