Trump signs off on new set of sanctions

Trump signs off on new set of sanctions 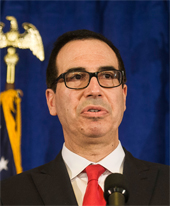 U.S. President Donald Trump signed an executive order on Thursday for a fresh set of sanctions on individuals, companies and banks doing business with North Korea.

This latest move comes less than two weeks since the United Nations Security Council passed its latest sanctions on the North over its latest nuclear test earlier this month.

“Today, the President… signed an executive order that strengthened the U.S. government’s ability to cut off funding to the North Korean regime and its weapons development program,” U.S. Treasury Secretary Steven Mnuchin said in a press conference at the New York Hilton Midtown in New York. “Foreign financial institutions are now on notice that, going forward, they can choose to do business with the United States or with North Korea, but not both.”

He added, “This new executive order will authorize Treasury to impose a range of sanctions, such as suspending U.S. correspondent account access to any foreign bank that knowingly conducts or facilitates significant transactions tied to trade with North Korea.”

He also said that it enables the Treasury to freeze assets of anyone conducting significant trade in goods, services or technology with North Korea and also allows it to “freeze assets of actors supporting North Korea’s textile, fishing, IT, and manufacturing industries.”

The sanctions bar aircraft and vessels that have landed in North Korea from landing in the United States.

He added, “No bank, in any country, should be used to facilitate Kim Jong-un’s destructive behavior.”

But the secretary said that the sanctions are “in no way specifically directed at China” and that they are “to block any financial institution that doesn’t follow through on the UN sanctions.”

South Korea’s Ministry of Foreign Affairs on Friday welcomed the new set of sanctions from the United States.

“The U.S. government’s sanctions will add to the efforts of the United States and South Korea and the international community to guide the North toward denuclearization,” the Foreign Ministry said in its statement. “The Korean government hereby emphasizes the importance of all countries to carry out the agreements of the UNSC resolution 2371 and 2375. And if North Korea keeps up its provocations, then South Korea will continue to explore options on the table to ensure that the international community can increase their pressure on the North.”

Kang will be visiting Washington from Sunday to Tuesday.