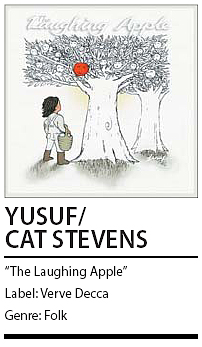 The artist now known as Yusuf/Cat Stevens did more than borrow from his own catalog for his latest album. He also reunited with the producer and acoustic guitarist who worked on his seminal hits from the 1970s, resulting in a new album that sounds like old Cat Stevens with even more light and wisdom than before.

Fifty years after Cat Stevens’ debut album, “The Laughing Apple’’ blends reimagined songs from 1967 with new compositions and newly completed 50-year-old unfinished tracks. Yet with Alun Davies’ sparkling guitars and Paul Samwell-Smith’s crisp production, the 11 songs sound like a cohesive set of tunes that always belonged together, and carry through themes of love and the joy of childhood.

“See What Love Did to Me,’’ the bright and cheery single, extols the life-changing power of love. It also boasts the most rocking bridge on the album.

The 69-year-old grandfather of eight also updated a song that first appeared on his 2000 greatest hits anthology. “Grandsons,’’ about the many delights a grandfather derives from his grandkids.