Football team will reunite with Hiddink

Football team will reunite with Hiddink 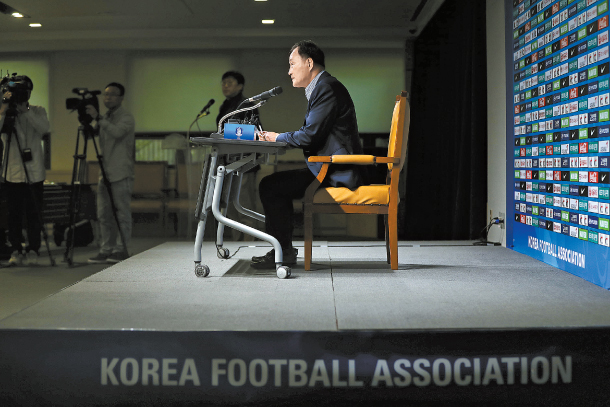 Kim Ho-gon, head of the Korea Football Association’s technical committee, speaks at a press conference at the KFA House in central Seoul on Tuesday. [YONHAP]

The Korean men’s football team is enlisting the help of an old hand to guide the team through its journey to the World Cup.

Guus Hiddink, the coach who led Korea to the semifinals in the 2002 World Cup, will return to the team’s coaching staff this year as it prepares for the 2018 World Cup in Russia.

“We’ll have further discussions regarding his position once officials from the Korea Football Association meet him in person,” Kim Ho-gon, head of the association’s technical committee, said Tuesday during a press conference at the association’s headquarters in central Seoul.

The committee has been analyzing the team’s performance in the most recent qualifiers that it played prior to earning the World Cup berth and mulling the return of Hiddink.

The former head coach suggested during a press conference in his native Netherlands on Sept. 14 that he would like to help Korea in any way he can after the team secured its spot in the World Cup. Kim said the Korea Football Association emailed Hiddink asking about his preferred role and conditions a day after the interview.

But the coach did not send a reply back, and the Korea Football Association has remained mum on whether Hiddink will join the team - until now.

“Hiddink will get a position in the national team, and his job will not be a symbolic one,” Kim said.

Although Hiddink will join the team’s coaching staff, Kim made clear that Shin Tae-yong would continue leading the team as head coach in the World Cup. Shin is expected to meet with Hiddink in Russia, where the team is playing a friendly match on Oct. 8.

In addition to Hiddink’s role on the national team, Kim also announced the new head coach of the U-23 team for the 2018 Asian Games in Jakarta, Indonesia.

Kim Bong-gil, the former head coach of Incheon United, will be leading the squad of under-23 players next year. Kim started his coaching career with the Jeonnam Dragons in 2005 and joined Incheon as assistant coach in 2008.

For two seasons from 2010, Kim was Incheon’s acting head coach, saving the team from relegation to the second-tier K League Challenge. His performance led to his official appointment to head coach in July 2012.

But the team failed to produce results, and in December 2014, he was sacked upon completion of the season. He currently coaches football at Chodang University in South Jeolla.

“He’s done a great job coaching for Jeonnam and Incheon,” Kim of the Korea Football Association said. “He’s tough, but also has a soft personality, which could work well with younger players.”

Kim is expected to lead the U-23 team through the Asian Games, but a separate head coach for the 2020 Tokyo Olympics will be selected in December.

The association hopes postponing the decision to December will expand their range of candidates for the role. “There’s still some time until the Olympics,” Kim said. “We’re planning on having more coaches as possible candidates once the K League and other football leagues complete their season in December.”