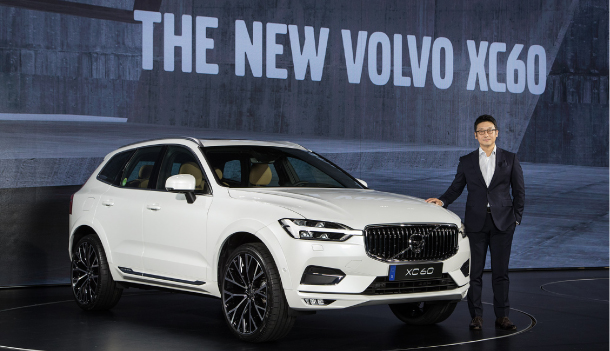 Lee Yoon-mo, CEO of Volvo Korea, poses next to the new XC60 at the launch event in central Seoul on Tuesday. [VOLVO CAR KOREA]

Volvo Car Korea, a local unit of the Swedish carmaker, launched a fully overhauled XC60 on Tuesday, the company’s first vehicle designed in part by a Korean designer.

The midsize SUV, which went through a complete overhaul for the first time in eight years, is one of Volvo’s bestselling models.

“The XC60 which launched in the latter half of 2018 has the record of selling 1 million units among all of Volvo’s line-up,” said Lee Yoon-mo, CEO of Volvo Korea, at the launch event on Tuesday.

“It is a volume model at Volvo and we are sure it will become a bestselling model [in Korea] within its segment,” he added.

The new XC60 has had a major facelift, which was overseen by the Swedish carmaker’s first Korean designer Lee Jung-hyun.

“While maintaining the essence of the first generation of the XC60, I wanted to make it more dynamic and sexy,” Lee Jung-hyun said at the event. “I was selected as a finalist with my design sketch, which I believe is because I shared the same vision for the XC60 with Design Chief Thomas Ingenlath,” he added.

The height of the car has been lowered by 55 millimeters but its length and width were increased by 45 and 10 millimeters respectively, giving the midsize SUV a more stable yet dynamic exterior.

“I imagined a constrained but muscular athlete when designing the car,” Lee Jung-hyun said.

“Volvo Korea sold 2,000 cars in 2013 but we expect 6,500 this year. The Swedish headquarters consider Korea to be a market with high potential and a trend setting country,” Lee Yoon-mo said. “The headquarters thought it would be a strategic move to give a price advantage to Korea considering that,” he added.

Living up to the reputation of ensuring passenger safety, the new XC60 comes equipped with upgraded safety features represented by the so-called Steering Support system, where the car intervenes with the driving to prevent possible collisions.

“Volvo is not about selling many cars, but about delivering a distinctive Swedish luxury car vibe to customers,” CEO Lee said. “It will differentiate it from German brands,” he added.