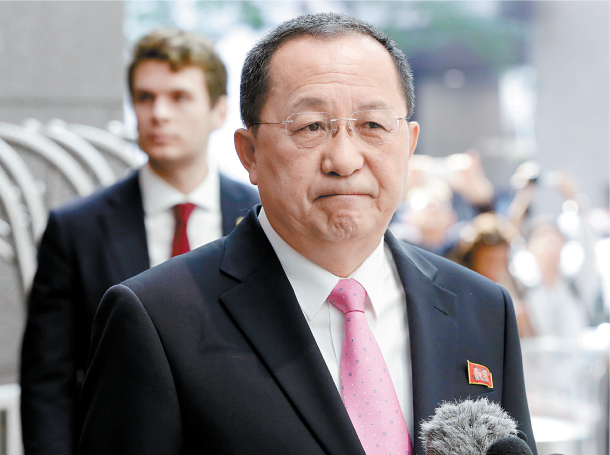 North Korean Foreign Minister Ri Yong-ho said Monday in New York that his country had the right to shoot down U.S. strategic bombers even if they weren’t in its airspace because U.S. President Donald Trump had “declared war” through an earlier statement on Twitter.

Speaking to reporters outside his hotel before flying home, Ri, who had been in New York for the United Nations General Assembly, said Trump’s tweet suggesting the North Korean leadership won’t be around much longer turned a war of words into “real action,” stressing it was “clearly a declaration of war” because the threat came from the White House chief.

“Now that the United States has declared war on our country,” Ri said in Korean, citing the UN Charter’s article of self-defense, “we will consider every right we have in regards to taking countermeasures, including the right to shoot down U.S. strategic bombers even when they are not inside our airspace.”

“The question of who will last longer will be answered then,” said Ri, urging the world to “clearly remember” the fact that it was none other than the U.S. that declared war on North Korea first.

The remarks were in response to Trump’s tweet on Sunday in which he wrote: “Just heard Foreign Minister of North Korea speak at U.N. If he echoes thoughts of Little Rocket Man, they won’t be around much longer!” “Rocket Man” is a nickname Trump coined for North Korean leader Kim Jong-un.

Ri, taking the UN podium on Saturday, four days after Trump said the U.S. would “totally destroy” North Korea if it was forced to defend itself or its allies, stated that Trump’s derisory nickname was an “irreversible mistake of making our rockets’ visits to the entire U.S. mainland all the more inevitable.”

North Korea will take “preventative measures by merciless pre-emptive action” if the United States shows any sign of trying to overthrow or attack the regime,” Ri said in his UN address.

In reaction to Ri’s threat to shoot down American warplanes, White House press secretary Sarah Sanders said Monday that Trump hadn’t declared war on the regime, adding that the suggestion was “absurd.”

“It’s never appropriate for a country to shoot down another country’s aircraft when it’s over international waters,” said Sanders.

“Our goal is still the same. We continue to seek the peaceful denuclearization of the Korean Peninsula. That’s our focus. Doing that through both the most maximum economic and diplomatic pressures as possible at this point.”

Colonel Robert Manning, spokesman for the U.S. Defense Department, warned the same day that if Pyongyang didn’t stop its provocative actions, the Pentagon would make sure it provides “options” to Trump to deal with North Korea, without elaborating further.

National Security Council Director H.R. McMaster said during an event hosted by the Institute for the Study of War in Washington that the Trump administration had “four to five” scenarios in mind to resolve the North Korea crisis, and that “some are uglier than others.”

The administration hopes to avoid war, but it “cannot discount that possibility,” McMaster said.

Ri’s mentioning of U.S. strategic bombers appeared to be in reference to the Pentagon’s recent flight mission of B-1B Lancer bombers and F-15C Eagle fighter escorts, which flew in international airspace over waters east of North Korea on Saturday.

The Defense Department, which said it was the farthest north of the demilitarized zone any U.S. fighter or bomber aircraft has ever flown off North Korea’s coast in the 21st century, underscored the seriousness with which it takes Pyongyang’s “reckless behavior.”

“This mission is a demonstration of U.S. resolve and a clear message that the president has many military options to defeat any threat,” the Pentagon said in a statement.

A South Korean government official said local authorities were watching for a possible military provocation from North Korea because Ri had hinted that one could come soon.

“North Korean diplomats usually have an exit plan when making any statements” in the international area, said the source. “But at the UN General Assembly, Ri Yong-ho used extremely derogatory terms like [referring to Trump as a] ‘dog,’ and expressions that sounded like they were some kind of an ultimatum. It could mean that North Korea might push through a provocation without hesitation.”