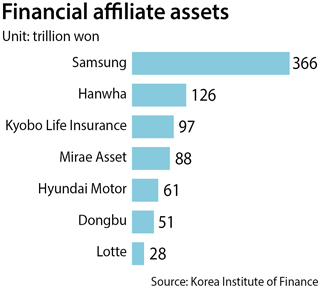 Seven major conglomerates with financial affiliates, including Samsung, Hanwha and Hyundai Motor, are expected to come under tougher financial scrutiny next year as President Moon Jae-in moves to deliver his campaign pledge of applying stricter standards to big family-run companies.

The proposal, however, is also raising eyebrows from some industry players since the tougher regulations add to what they see as already strict financial restrictions against affiliates.

The Korea Institute of Finance, a state-affiliated think tank, proposed the scope and potential targets of the regulations in a presentation on Wednesday, which will become a reference when the Financial Services Commission devises the expanded oversight rules.

The corporations proposed by the think tank are Samsung, Hanwha, Hyundai Motor, Dongbu, Lotte, Mirae Asset Financial Group and Kyobo Life Insurance on the grounds that their financial affiliates control more than 20 trillion won ($17.4 billion). The other criteria was that two of their business segments - whether they are banking, non-banking, securities or insurance - have combined assets of 5 trillion won.

When the draft comes into effect, seven new companies may need to comply with capital requirements and risk management rules required for financial holding units.

Currently, each financial affiliate is independently subject to financial requirements concerning debt and capital reserves, but the authorities have raised the need to comprehensively manage risks as a group.

Choi Jong-ku, chairman of the Financial Services Commission, said that the move is aimed at strengthening risk management and preventing unfair internal dealings among affiliates.

“[The Financial Services Commission] will tighten the supervision of corporate groups with financial companies to prevent them from supporting their affiliates using the assets of clients or mishandling potential risks,” said Choi.

Choi was alluding to the plight of Tongyang Group. The group’s Tongyang Securities was accused of nudging investors into buying the bonds of other Tongyang affiliates in 2013 while not informing them of the financial weaknesses of its affiliates.

The group’s Chairman Hyun Jae-hyu allegedly ordered Tongyang Securities employees to advise investors to buy the bonds, especially in Tongyang Cement, which had a lower debt-to-equity ratio than other affiliates.

But the cement unit went into court receivership in 2013 as Tongyang Group faced a liquidity crisis.

Choi said that the financial regulator plans to implement the new oversight system next year after finalizing the rules within the year.

The conglomerates took a cautious stance on the planned measure.

“Still, it is not the finalized, official version of the new rule,” said a source at one of the seven groups who spoke on condition of anonymity.

“At this stage, we are studying the impact of the plan,” the source said.

Another source in the finance industry, however, said that the government is heavy-handed in pushing the regulation.

“Whether it is a bank, card company or insurance, the government applies strict financial requirements in different forms,” the source said.

“In the case of insurance players, we need to raise higher risk-based capital to hedge against risks and many other requirements when buying and selling equities,” the source continued.

“So, the new measure will only add further pressure and we see it as unnecessary, redundant rules.”

Putting large chaebol groups with financial affiliates on a watch list was one of the major agendas of the Moon government.