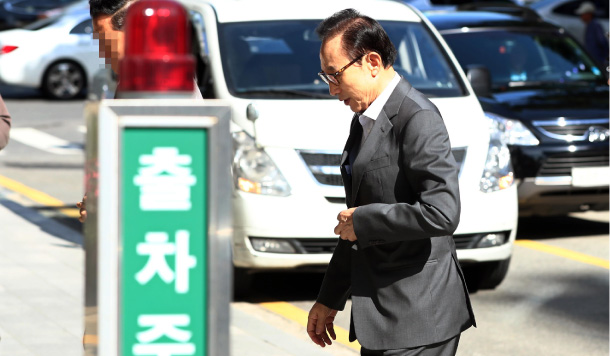 Former President Lee Myung-bak walks to his office in Samseong-dong, southern Seoul, on Thursday. Lee responded bitterly to the Moon Jae-in administration’s attempt to dig up dirt from the past, calling it a “retrogressive attempt” destined to fail. [YONHAP]

The dream job for a Korean in his 30s would be state prosecutor. For someone in his 40s, a place in the Ministry of Finance and Strategy is the best. In the 50s, a dad whose son or daughter gets into an elite university is most envied. In the 60s, it would be the owner of a small or mid-sized enterprise. This is because all the expenses to run a home, a private get-away in the countryside, a foreign luxury car can be charged to the company, a lawmaker told me a long time ago. At the time, a chairman of a large conglomerate was being questioned by the police for embezzling about 3 billion won ($2.6 million) to build a private residence.

Few business owners in Korea buy a luxury residence in popular resort areas like Yongpyeong or Jeju Island or a German luxury car with their own money, a fact that would be unthinkable in advanced economies. Former CEO Jeffery Skilling of Enron, which had revenue of $100 billion, was sentenced to 24 years and four months prison for cooking the books to the tune of $1.5 billion. If his business had been in Korea, he would be back in his office by now, the Financial Times sneered.

Businessmen hate politicians, but they can hardly deny that they benefit most from second-grade politics. They are an experts in going around the laws, exploiting loopholes and escaping punishment.

The lawmakers themselves know that there are too many regulations and redundant or even some impossible laws. Even lawmakers know they need not obey the laws. Of the previous National Assembly members, 22 lost their seats before their four-year terms ended. In the United States, such cases numbered one or two — over the last century! Even if their crimes are not as grave as to cost them their seats, there are few whose irregularities with real estate or other assets are exposed during confirmation hearings when they are nominated for senior government posts.

Over 1 million people are headed overseas over the long Chuseok holiday this year. Not many are likely to keep to the tax exemption cap when shopping.

During the Roh Moo-hyun administration, there was a law called the Construction Industry Act. The law suspended the business of a company for a year if an employee commits bribery. Its idea was to root out rampant corruption in construction deals. A construction company with thousands of employees and revenue of over $1 billion would go out of business if it was suspended for a year. The industry complained that it was unfair for a company to share the responsibility when the individual accused of the wrongdoing got punished.

Korea Inc. is suffocating under multiple layers of unreasonable regulations drawn up by second-rate politicians. Corporate owners must be contained in their mighty powers and prerogatives. But laws that choke corporate activities and risk making many businessmen potential criminals must be fixed. The National Assembly cannot be expected to make sweeping reforms on the chaebol when rival parties support large companies or labor unions.

The administration of President Moon Jae-in is going through the same ideological ritual. It has gone after former officials of the President Lee Myung-bak administration. Wrongdoings should be probed and punished. But the revenge repeats itself and those accused under a different government see the move as spiteful.

To achieve unity, the reasons for division must be addressed. Without ending such a vicious cycle, we cannot be done with the fundamental ills. We have been marking time and going nowhere for decades. Bad habits and ills during the time have only piled up. When will the real ills be corrected?