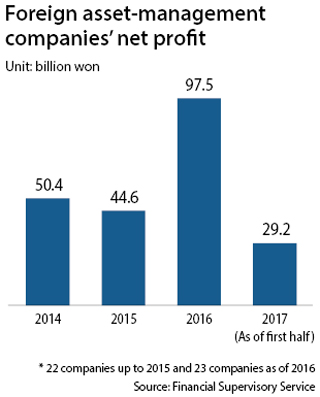 In the past few months, foreign asset-management companies have either been cutting down their business or packing up entirely from Korea as they face a cold market.

Fidelity, which has managed roughly 50 billion won ($44 million) in funds here, is scrapping its fund management business and instead focusing on research in overseas markets for Korean companies.

The company said it had become difficult to maintain its asset management team as the number of investors interested in exchange-traded funds was increasing compared to those interested in equity funds.

One of the reasons for this flight, many analysts say, is that foreign asset-management companies’ core business models do not align with Korea’s fund market trends. Many foreign companies provide offshore indirect investment funds that invest in products created by its headquarters. As a result, many of the products are publicly offered private equity funds.

The Korean market for these funds, though, has been sluggish for the past 10 years. Between 2007 and the end of this August, the size of such funds only grew from 223 trillion won to 237 trillion won, a relative drop in the bucket, according to the Korea Financial Investment Association.

On the other hand, the size of private equity, real estate and other special-asset funds has expanded greatly, with private equity funds tripling to 282 trillion won.

Officially, the Financial Supervisory Service has stressed that the fundamental problem foreign asset-management companies faced was that the local market for publicly offered funds failed to pick up after the global financial crisis, and as a result, the companies’ performance suffered.

Foreign companies were unable to expand their resources with such dismal numbers, outnumbered by their local competitors in terms of staffing. According to the Korea Financial Investment Association, a single fund manager is juggling 41 funds worth a total 1.9 trillion won at Fidelity.

But a source in the industry said that simply comparing the number of fund managers at companies is meaningless because actual management is done by headquarters and the local fund manager’s role is hedging.

One thing experts agree on is that the exodus of foreign asset-management companies will have a long-term negative impact on Korean capital.

“Considering the positive role that prominent foreign asset-management companies have by providing more diverse products to local consumers,” said Lee Hwan-tae, head of the asset management support division at the Korea Financial Investment Association, “there needs to be a strategy to attract these foreign companies where both sides can benefit.”