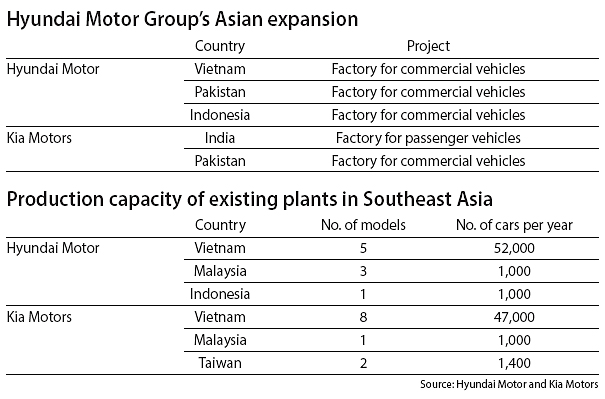 With Hyundai Motor and Kia Motors taking hits from all sides, including tanking sales in China and protracted labor fights in Korea, the management of the auto group encompassing both automakers is scrambling to maintain profits at the two companies by expanding their markets and product portfolios.

For Hyundai Motor Group, the Chinese auto market, the largest in the world, has long been a key battleground outside of Korea, generating about 20 percent of the group’s sales.

The heavy dependence on the Chinese market, however, backfired when Beijing chastised Seoul for installing a U.S. missile defense system that China believes threatens its regional security interests. The diplomatic row led to a Chinese consumer boycott of Korean products that cut Hyundai and Kia’s sales in China by nearly 50 percent in the first half of this year.

On top of that, domestic production is expected to take a blow as a wage dispute with the companies’ labor unions drags on indefinitely.

Amid the troubles, Chung Eui-sun, vice chairman and heir apparent to the world’s fifth-largest automaker, is trying to steer the wheel to other markets in Asia, namely Southeast Asia.

During his visit to Vietnam this March, Chung met with the country’s president, Tran Dai Quang, and highlighted the growing importance of the Vietnamese market to Hyundai Motor Group.

According to data from the Vietnam automobile manufacturers’ association, a total of 304,427 cars were sold in the country last year, up 24 percent from 2015, a record figure for the Vietnamese market. The association forecasts that total sales this year will increase by 10 percent.

To spur expansion in Vietnam, Hyundai is in the process of establishing a factory capable of assembling 30,000 commercial vehicles a year there. It will put together cars that have been exported by Hyundai in the form of disassembled kits.

Last month, Hyundai signed a joint venture contract worth 90 billion won ($78.57 million) with Thanh Cong Group, a Vietnamese conglomerate, to build the plant. Hyundai and Kia already has one factory each in Vietnam for passenger vehicles.

The production facilities will especially come in handy when the Association of Southeast Asian Nations’ agreement to lift tariffs on vehicles manufactured inside the member nations goes into effect next year.

In India, which Chung visited in July, Kia is building a plant capable of manufacturing about 300,000 cars a year. The project is worth $1.1 billion and is scheduled for completion by 2019. It’s expected to relieve Kia of the 60 percent import tax that the company would have had to pay otherwise.

The vice chairman’s personal trips to both countries underscore the markets’ importance to the auto group. “Demand for cars in Southeast Asia and India is growing at a rapid pace,” a Hyundai spokesperson said. “We need to act quickly to meet the market demand and create new opportunities.”

Another item on Chung’s playbook for the year is diversifying the group’s products. Until this year, Hyundai and Kia had no small-sized sport utility vehicles, despite the rapid growth of the market.

So when Hyundai’s Kona was released earlier this year, the vice chairman delivered the presentation, a rare occurrence since members of Korean conglomerates’ owner families typically do not appear before an audience for just a single vehicle model. Chung also showed up during the launch of the Genesis G70, a sports sedan under Hyundai’s luxury brand.

Both the Kona and G70 were reportedly the brainchildren of Chung, with the vice chairman directly involved in their development.

“Newly growing markets as well as the SUV and luxury car markets are the current battlegrounds for global carmakers,” an industry source said. “Hyundai and Kia must be more proactive in order for the Korean auto industry to not fall behind.”