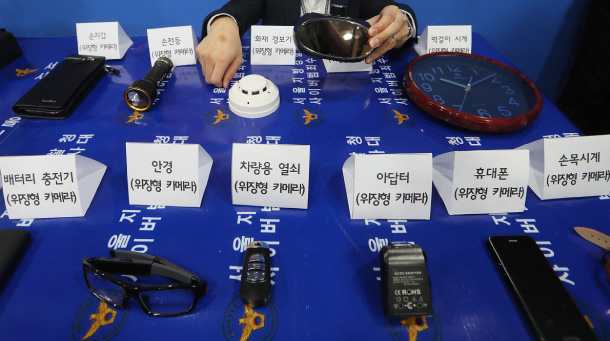 Seoul Metropolitan Police Agency’s Cyber Security Division displays various types of spy cameras on Sunday, all confiscated from a smuggling ring - hidden in a clock, a wristwatch, glasses, a purse and so on. [YONHAP]

The threat of hidden cameras has reached a new level as it was recently discovered that some, disguised as everyday objects like clocks, have been used to film couples having sex in motels.

Seoul Metropolitan Police Agency’s Cyber Security Division arrested a 41-year-old surnamed Hong and two others on Sunday for reselling smuggled cameras from China to people who then either filmed strangers having sex or recorded themselves having sex with unsuspecting partners in motels. Police confiscated Hong’s laptop and found numerous such recordings. The footage had been taken by Hong’s customers, who had returned their spy cameras to Hong for repair. Hong had “backed up all the customers’ files so none would be damaged or erased during repairs.” Looking through the footage, police were able to track down those suspected of having secretly filmed people having sex.

They arrested one man for installing table-clock spy cameras in guestrooms and filming 50 different couples having sex at motels in Incheon and Pyeongtaek, Gyeonggi. Another man was arrested for recording himself having sex with 12 different women without their knowledge on 60 separate occasions using a hidden camera disguised as a handbag.

Two other men were charged for filming their girlfriends with wristwatch spy cameras, or secretly filming activities inside commercial sex businesses. Hong and his accomplices were also charged for not complying with appropriate certification standards when reselling the cameras.

When selling spy cameras disguised as everyday objects like glasses, portable batteries or table clocks, vendors must have each piece of equipment certificated in accordance with Korea’s Radio Waves Act. Even the batteries used in cameras have to be certified as safe before use, as stipulated by the Electrical Appliances and Consumer Products Safety Control Act. “They had not taken the necessary certification procedures,” one officer explained, “because they wanted to avoid paying the associated application fees and thereby minimize the cost of each camera.”