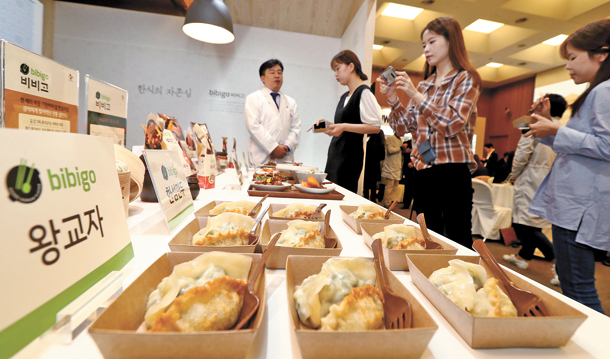 CJ CheilJedang revealed its vision for the future of its instant food business Wednesday, along with a goal to reach 3.6 trillion won ($3.2 billion) in sales by 2020, with 40 percent of the target coming from global markets.

The new sales target is three times the annual sales from last year, when the company first generated over 1 trillion won from the “home meal replacement” sector - a term commonly used in Korea to describe instant food that is nutritionally more balanced to fulfill the requirements of a single meal.

The announcements came at CJ CheilJedang’s showcase for home meal replacement brands, held Wednesday at CJ HumanVille in Jung District, central Seoul. This was the first time it organized a media event to introduce its vision and strategy for its entire instant food sector.

A company originally known for flours and sugar, CJ CheilJedang’s first foray into instant food was its pre-cooked rice product, Hetbahn, released in 1996 when the concept of instant rice was still relatively unknown. In the last five years, CJ CheilJedang has also introduced frozen dumplings and non-frozen instant dishes.

The new products turned out to be a success: The home meal replacement market grew threefold from 710 billion won in 2009 to 2.3 trillion won last year, fueled by the rise of single and two-person households.

Abroad, all of CJ CheilJedang’s instant food dishes are sold under the brand Bibigo, which the company plans to continue to expand overseas. The company already has foreign manufacturing facilities in the U.S., China and Russia.

“Korean recipes are the basis of our home meal replacement products sold abroad, but localization is a must,” said Shin Hyun-soo, executive vice president and head of the global food business group. “At each market, we conduct thorough research on eating habits and the preferences of foreign consumers and apply them to the recipe of Bibigo products made abroad.”

For example, Bibigo dumplings sold in Korea contain pork and chives as the main ingredients whereas the ones made in China are based on corn and cabbage. America’s version of Bibigo contains cilantro - a vegetable not widely preferred in Korea.

Next year, CJ CheilJedang is expecting to launch another manufacturing facility in Jincheon, North Chungcheong. Son Eun-kyung, CJ CheilJedang’s marketing executive for the food sector, explained that this new factory is significant as most of the manufacturing there will be automated, pulling down costs.